The third annual REDD+ symposium will be held at the National Assembly Library on Thursday, under the management of the Korea Forest Service and the sponsorship of the parliamentary climate change forum, according to KFS officials.

REDD+, which stands for “reducing emissions from deforestation and forest degradation in developing countries plus,” is a KFS initiative affiliated with the United Nations-led REDD campaign.

The project is expected to promote South Korea’s leading status in forestation in global society and also bring economic benefits such as carbon emissions cost reduction.

Korea, which is likely to face a reduction in its greenhouse gas emissions quota in upcoming years, should make the REDD+ agenda a key necessity, not an option, according to the KFS.

“The key purpose of this year’s symposium is to share the progress of ongoing and impending REDD+ overseas projects and to analyze the recent global trends on climate change,” said an official of the KFS.

The ultimate goal is to make sure that the country is ready for the new climate change system which is to take effect in 2020. 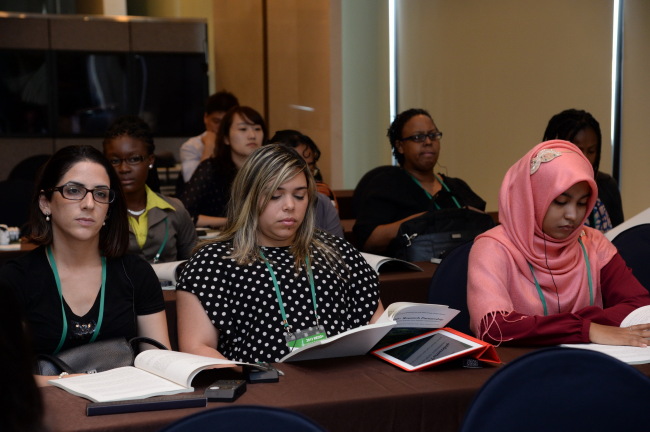 Forest affairs officials from Indonesia and Cambodia, along with representatives of the ASEAN-ROK Forest Cooperation Agreement, the Global Green Growth Institute and the United Nations Food and Agriculture Organization, participate in the 2013 REDD+ Symposium in Seoul. (Korea Forest Service)
Korea’s REDD+ model is characterized by close bonds with local residents, the application of advanced information technology, and its past experience of forestation, according to the KFS.

“A successful REDD project not only involves the reduction of greenhouse gas but also considers the livelihood of local residents,” the official said.

“If the global community and the local government plan to prevent deforestation and to reduce gas emissions, they are also responsible for providing people with alternative means of living, or else the preservation will not be sustainable.”

South Korea’s experience of overcoming its post-war deforestation in the 1960s may be a valid example for other developing countries, the official added.

The KFS’ strategy is to make the best use of Korea’s long-term partnership with Southeast Asian states, most of which have high potential for forestation and REDD+ project progress.

It was largely for this reason that the KSF chose Indonesia as its first and key REDD+ partner and made the ASEAN-ROK Forest Cooperation Agreement one of the top priority guests in this year’s symposium.

Forest ministry officials from Indonesia, Cambodia, Myanmar and Laos, as well as representatives of the United Nations Food & Agriculture Organization and the International Fund for Agricultural Development will also be attending.

“Our target is to voluntarily reduce carbon emissions by 30 percent or more,” said the KFS official.

“So far, our model projects in Indonesia and other Southeast Asian countries have been productive, but there is a need to have an interim check.”

Leading countries in the field, such as Norway, Japan and the United States tend to focus their investment in REDD+ potential states such as Indonesia, Brazil and Myanmar.

“Now that we have joined the REDD forum, it is time to make more detailed analyses and develop a customized Korean model, and that is what this year’s symposium is about,” KFS officials said.