Previous period flicks have enjoyed notable successes, including “The King and the Clown” in 2005 and “Masquerade” in 2012. But none became box-office hits as quickly and sensationally as “Roaring Currents.”

The film premiered on July 30, with the biggest-ever opening-day viewership in Korean film history (682,778 viewers). It topped the 6 million mark in just seven days on Tuesday, four days faster than the previous record set by “The Thieves” in 2012. The film also passed the 2 million, 3 million and 4 million viewer marks the fastest in history, renewing records each day. 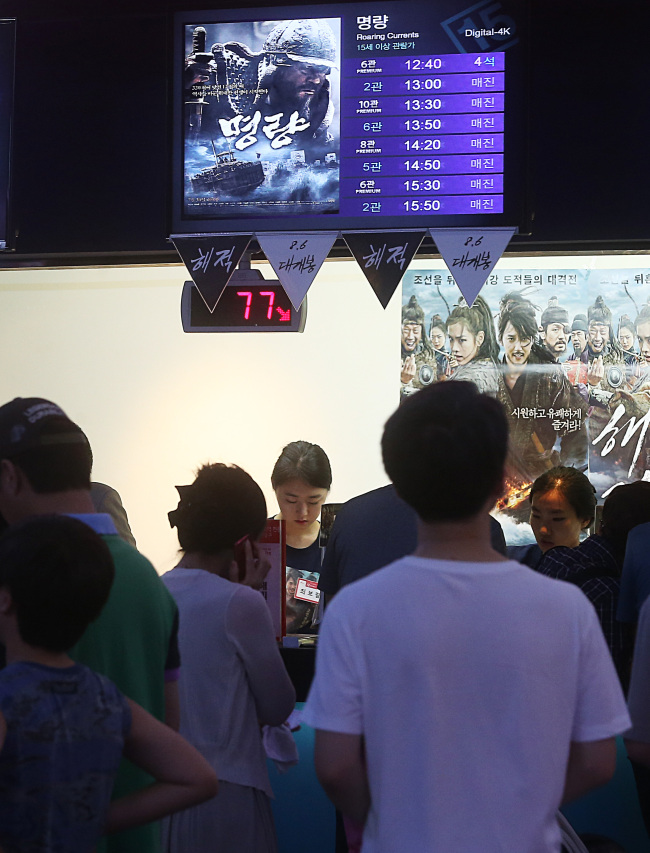 People line up at a theater in Samseong-dong, southern Seoul, to purchase tickets to watch the period action flick, “Roaring Currents.” (Yonhap)
It seems only a matter of time before it reaches the 10 million viewer milestone ― a feat only nine Korean films have achieved.

Why is this serious, two-hour-long historical film about Adm. Yi Sun-sin suddenly sweeping the nation?

Every child in Korea knows the name of Yi, one of the nation’s most revered heroes. Cinematic brilliance also highlights the admired figure, drawing an ever increasing audience.

“There are not too many figures who everyone admires,” said Yu Gina, a professor of film and digital media at Dongguk University. “The director put all of it together on a screen in a clever manner: a venerated figure in one of his most remarkable military achievements, backed by strong historical facts, added with a impressive spectacle of action scenes, but at the same time touching people’s sentiments.”

Directed by Kim Han-min and following his recent success with the historical action film “War of the Arrows,” “Roaring Currents” centers on the historic Battle of Myeongryang in 1592 at the dawn of the Japanese invasion of Korea (1592-1598). In the film, Yi uses a brilliant strategy to destroy 330 Japanese warships with only 12 ships under his command.

Others have said that people connect with the film by observing the personal side of a hero. “We all know that Yi Sun-sin is a great hero, but the film depicts him less as a hero and more as a human being with fear and weaknesses,” said film critic Jeon Chan-il.

“The admiral was fighting within the populace, without ever standing out. Just like all of us, Adm. Yi has fears especially on the brink of a gruesome battle. But in the midst of all that, he decides to make a move to overcome that fear. Overcoming fear is what people ultimately saw, cheered and were inspired by.”

Director Kim said he made the film based on his honest reflection after reading “Nanjung Ilgi (The War Diary of Yi Sun-sin).”

“He was a soldier with a humble heart who lived fully with his own set of principles and national vision. I think that is what Yi’s leadership is about,” Kim added.

Just as the director hoped, it was Yi’s leadership that highlighted the film for the viewers.

“We all missed a great leader who truly thinks of his people,” said one movie goer.

According to critic Jeon, Yi lived out the definition of servant leadership: “a selfless leader who led his troops only to save the people, not for himself nor his benefits.”

“He was willing to take high risks for greater return for the people,” Jeon said. “This kind of sacrifice and fidelity is what the people expect from their leader. But due to circumstances, people only see their absence in today’s society through the film. They earnestly long for leaders like Yi.”

Yi Sun-sin syndrome is alive in bookstores as well. Sales of books on Yi Sun-sin have risen by 54 percent in July from the same period last year at Kyobo Bookstore, the country’s largest bookstore chain. Male and female readers bought an almost equal number of books on Yi, with the 40-something age group purchasing the most.

Though people have watched “Roaring Currents” for various reasons, many agree on one thing: The film and the tale of Yi Sun-sin have resonated with them deeply.