[ The Korea Herald – Send E-mail ]
[Herald Review] Fearful battle for the fearless admiral
‘Roaring Currents’ details compelling chronicle of Adm. Yi and his Battle of Myeongryang
By Korea Herald
Published : Aug 3, 2014 - 20:27
Updated : Aug 3, 2014 - 20:59
Audiences were already eager for the film “Roaring Currents,” even before it premiered. Part of it had to do with veteran actor Choi Min-sik (“Old Boy”) starring as the protagonist, Adm. Yi Sun-sin. The rest was the fact that the film is about Adm. Yi, one of the most revered figures in Korean history. His statue stands at the heart of Seoul in Gwanghwamun.

The film’s broad road of success was forecast as the film centers on the historic Battle of Myeongryang in 1592, during the Japanese invasion of Korea (1592-1598). It is regarded as the most remarkable military achievement of Adm. Yi.

The history itself is more exciting than any action film. Adm. Yi used strategy to destroy 133 Japanese warships with only 12 ships under his command ― the film exaggerates the number of Japanese warships at 330, but 133 ships is still a significant amount. 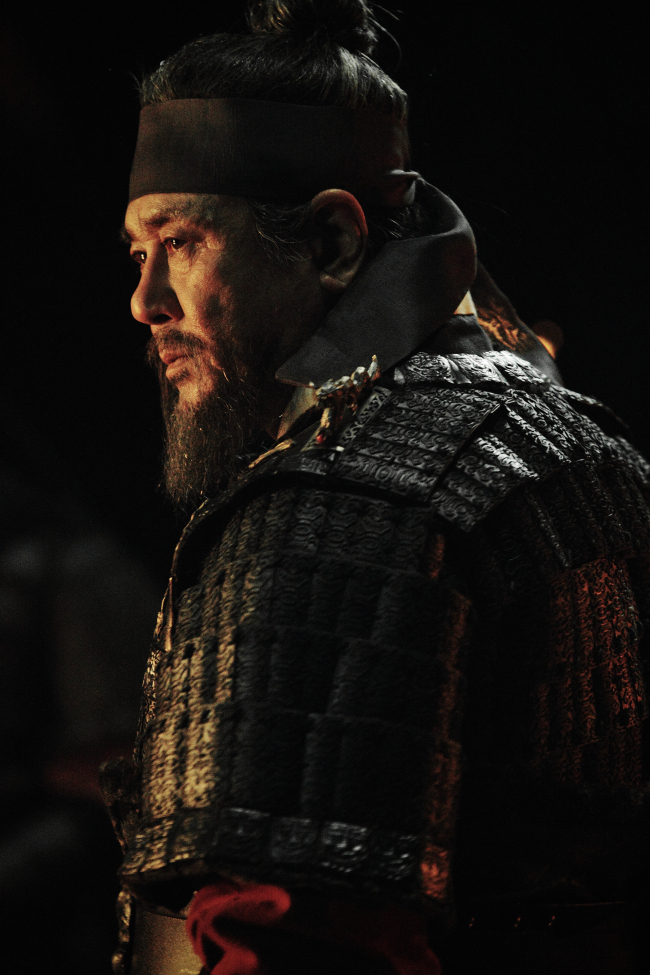 Actor Choi Min-sik plays Admiral Yi Sun-sin in “Roaring Currents.” (CJ Entertainment)
But the film is far more enriching and interesting than its sheer magnitude ― a big, expensive, star-studded, didactic film with naval battle scenes. The film portrays Adm. Yi not as an aloof warrior, but as a father and a warrior who is fearful and lonely on the brink of a gruesome battle. Viewers are able to connect on certain aspects and root for a leader like this.

“I had no intention of reinterpreting him with new facts or different points of view,” said the film’s director Kim Han-min at the press screening last week. “I made the film based on my honest reflection after reading ‘Nanjung Ilgi, (The War Diary of Yi Sun-sin),’ no more and no less.”

“He was a soldier with a humble heart who lived fully with his own set of principles and national vision. I think that is what Yi’s leadership is about,” Kim added.

This detailed and compelling chronicle is divided into two sections. The first part entails the anguish and deep pressure the hero faces as he comes to the battlefield, which can feel a bit lagging to those excited to see the much-touted battle scene that lasts 61 minutes.

The naval combat scene between Adm. Yi and Japanese Adm. Gurujima, played by iconic star Ryu Seung-ryong (“Miracle in Cell No. 7”), is fast-paced and lively.

The Battle of Myeongryang in 1597 during the Japanese invasion of Korea (1592-1598) is regarded as Admiral Yi Sun-sin’s most remarkable military achievement. (CJ Entertainment)
However, in the long, detailed and nerve-wracking combat scene, the film does not illustrate Adm. Yi as a genius strategist or someone who has unbelievable sword skills. The entire battle is conducted one stab and a single bowstring at a time.

Unlike what people imagined of the Battle of Myungryang ― learning from history books ― the victory is only possible with the cooperation of all the soldiers, who at first resist Yi’s order to proceed toward the Japanese warships because they are too scared.

The families desperately waiting for their sons and husbands to return take credit as well. In a scene showing those left behind, actor and singer Lee Jung-hyun steals the spotlight as a mute woman who uses her hands, feet and body gestures to portray her ardent desire for her husband to return home. But most of all, it is Adm. Yi’s leadership that shines.

His leadership is wise and careful but determined. He has authority but is not authoritative. He adheres to principles but is not a fundamentalist. He knows exactly what the problem is with his soldiers: “The main problem is the fear that is spreading like a poison within the people, not the hundreds of Japanese warships approaching.”

And finally when the admiral and his men overcome their fear of death, they are able to fight the battle that was regarded impossible to win.

That is why when the quick currents of the Uldulmok Passage in Jindo ― where the battle is fought ― are on Adm. Yi’s side allowing him to crush the Japanese warships, it didn’t feel like a miracle, but more a well-deserved and hard-earned help from nature.

Music also plays a key role throughout the film. The 17th and 18th century classical music played by a grand orchestra of 150 people, helps portray the grandeur in the serious action scenes. The director thought the use of a western orchestra from the same period would add to the film’s scale.

In fulfilling hype, “Roaring Current” has drawn a landmark number of viewers already, topping film records on five different areas, including biggest opening with 682,833 viewers on July 30, highest number of single weekday visitors with 866,373 viewers on Aug. 1, and drawing 3 million viewers in four days, shoving the record set only a week ago by another period action flick “Kundo: Age of the Rampant” to second.

Whether “Roaring Currents” will spur another era of periodic films remains to be seen, but for sure, it has reminded the audience of what a victory in battle is made of.