[ The Korea Herald – Send E-mail ]
U.S. Chamber of Commerce chief urges FTA implementation
By Korea Herald
Published : Jul 24, 2014 - 21:10
Updated : Jul 24, 2014 - 21:10
The head of the U.S. Chamber of Commerce on Thursday called for the faithful implementation of the free trade agreement between South Korea and the United States to improve the global competitiveness of both countries and their business communities.

“For Korea to be truly recognized as an FTA leader ― and a good and reliable FTA partner ― it needs to put higher priority and more effort into full implementation of these agreements.” 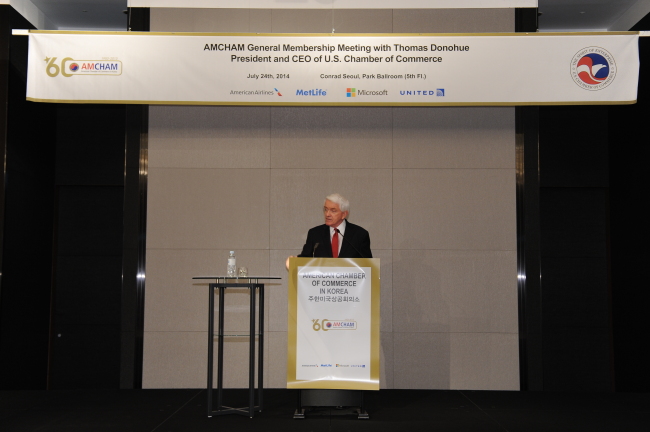 Thomas Donohue, president and CEO of the U.S. Chamber of Commerce, speaks during a general membership meeting of the American Chamber of Commerce in Korea held in Seoul on Thursday. (AMCHAM)
While admitting that Koreans are buying more U.S. services and a wider range of agricultural products, Donohue noted specific sectors that need more work.

He said in some cases ― mainly in sectors such as autos, rules of origin, financial services, pharmaceuticals and medical devices, and digital commerce ― “things are moving too slowly.”

Other sectors in which nontariff barriers are restricting trade, or in which new rules or guidelines are required to meet the requirements of the Korea-U.S. FTA are also showing sluggish improvement, Donohue said.

“Why (is it that) Korean safety tests to evaluate certain automotive components are not used anywhere elsewhere in the world? Why are the methodologies used to determine reimbursement rates for medical devices not used in any other major market?”

Donohue said local business practices should be in line with those of other major economies to help build confidence among U.S. and other foreign investors.

On a positive note, he forecast that Korea would face relatively lower hurdles in joining the U.S.-led Trans-Pacific Partnership agreement, owing to its existing FTA with the U.S.

“It makes abundant sense for Korea to join the TPP at the appropriate time,” he said. “I’m confident that the American business community and our political leaders would support Korea’s entry into the TPP.”