Kakao, which sells a variety of character products from notebooks to dolls, has recently teamed up with baked-goods maker SHANY, an affiliate of SPC Group, to produce Kakao Friends Bread, featuring mobile characters including Muji, a yellow radish in a bunny costume, Apeach the peach, and cranky cat Neo. 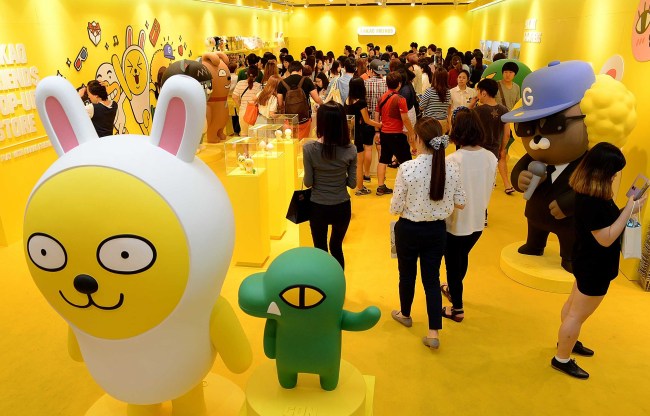 Customers look around Kakao’s pop-up store at Lotte Department Store in Busan on July 5. (Yonhap)
Around 200,000 units of the SHANY Kakao Friends Bread are sold per day, according to Samlip, a family brand of SHANY.

The firm and its rival Line run by Naver have been competitively beefing up their respective character businesses since the mobile characters become revenue sources and enhanced the images of the firms.

With its characters being well received by customers, Kakao Corp. is trying to expand the range of products, including wrist watches.

However, the company, which now must complete a merger with Web-portal operator Daum this year, is not without glitches.

“Some of the manufacturers for Kakao’s character products have put production on hold because the final decisions on the design and production volumes have been delayed from Kakao,” said an industry source, adding, “they suffer from financial damage caused by the postponement.”

It is said that Kakao’s co-CEO Lee Sir-goo has the final say in inking deals with its partners.

Since April Kakao has launched pop-up stores in the downtown areas in Seoul and Busan. The company sold 20,000 character products ranging from dolls and umbrellas to cups in just three days after opening a store in Sinchon, Seoul.

The mobile messenger operator currently has some 150 million users globally.