When they are not hitting the pubs and karaoke bars that stay open until sunrise, some Koreans choose to watch films in 24-hour cinemas, check out evening art exhibitions or enjoy bindaetteok ― Korean mung bean pancakes ― at a night food market.

Here are some of the ways to have fun in Korea at night, from movies to the dance club scene in Itaewon.

Who says art exhibitions are just for the daytime? Seoul’s major art galleries are open until late at night on certain days, offering visitors a chance to enjoy the shows even after a long day at work. 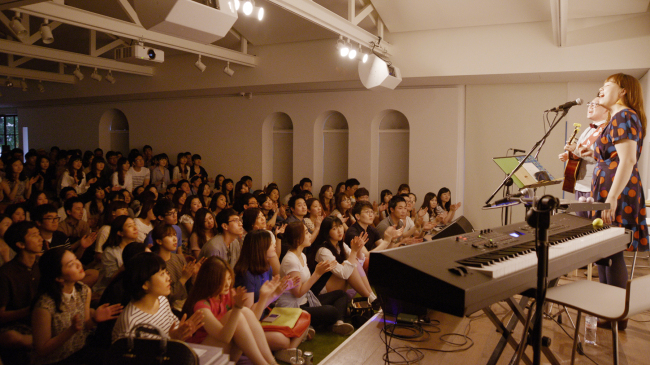 An art gallery offers a special program at night. (Daelim Museum)
The Seoul Museum of Art, a museum in central Seoul behind the picturesque Deoksugung Palace, stays open until 10 p.m. on the first and third Tuesday of each month.

The building was first constructed in 1927 to house the Supreme Court during the Japanese colonial period, but was later restored and turned into today’s museum.

“We have been doing this since 2012,” said curator Byun Ji-hye from the museum.

“We found that many working professionals in the city wanted to visit the museum after they finish work, but couldn’t because of their working hours. The purpose is to let these people enjoy art without having to worry about getting off work early and travel time. We get a lot of couples who are on dates, too.”

Among the exhibitions currently on show is “Malfunction Library,” which features works by Korean artists in their 30s and 40s who were inspired by today’s information-obsessed culture.

Among them, artist Kim Kyoung-ho, who has worked at the Korean bureau of Iranian Press TV, presents two versions of news footage. One is the original he filmed, and the other is the edited version that was broadcast.

Also in the show is “Universal Studio Seoul,” which features works by 13 Seoul-based artists from overseas, including Australian artist Emil Goh, who died in Korea in 2009.

Another is Kondo Yukako, who is married to a Korean and depicts her life here as a member of a Korean family in her works.

“It is just a nice way of ending your day,” said Kim Eun-hyung, an office worker in her 20s who visited the museum after 8 p.m.

“I actually dragged myself (to the museum) that day, because I was rather tired after work, but it was worth it. I felt energized after the exhibitions.”

Aside from SeMA, the National Museum of Modern and Contemporary Art in Samcheong-dong, central Seoul, also stays open until 9 p.m. every Wednesday and Saturday.

For more information on SeMA, visit sema.seoul.go.kr. For information about MMCA, visit www.mmca.go.kr.

Koreans of all ages ― mostly students and office workers ― queue up to grab a seat in the market’s signature “pancake” restaurants or sit at one of 200 food stalls running through the center of the covered alley, clinking glasses and rubbing shoulders.

Some of the market’s specialties are “drug” kimbap (rice roll), given its name due to its addictive taste; arm-sized “king” sundae (blood sausage); and crispy nokdu bindaetteok (mung bean pancakes), according to Sim Seo-woon-yeo, who has run a second-generation food stall called Kyungtae’s House for the past three decades.

Jun Jeff and his girlfriend visit the market to taste some of the specialties.

“All the foods here are affordable and delicious,” Jun told The Korea Herald while pouring soju into a glass and handing it to his girlfriend.

But there is another reason the couple hangs out at the market.

“It is quite romantic for us to sit close to total strangers and even talk to them over food and drinks,” Jun said.

Gwangjang Market’s food bazaar is situated near Jongno 5-ga Subway Station’s Exit 8. You can easily access Cheonggyecheon Stream, right next to the market, to walk off your meal. The market is open from 9 a.m. to 11 p.m. every day.

One of the most affordable ways to escape the summer heat at night is to hit a movie theater. CGV Gangnam operates 24 hours a day, allowing moviegoers to see a film anytime regardless of their schedule.

Meanwhile, in Yeongdeungpo-gu, southwest Seoul, a special night market is being held once a month until October.

The unique, community-centered market offers handmade, environmentally friendly products at affordable prices, including soap, candles and even jewelry. Many of the items on sale are created by local people in their own homes. 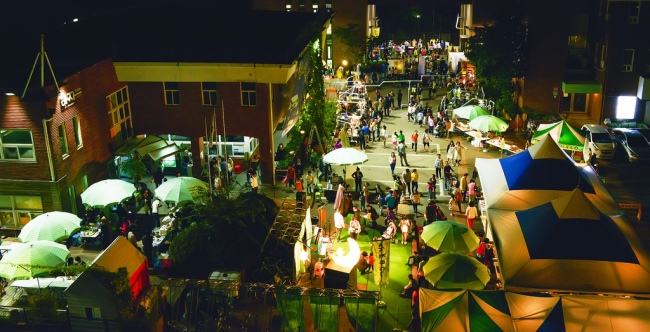 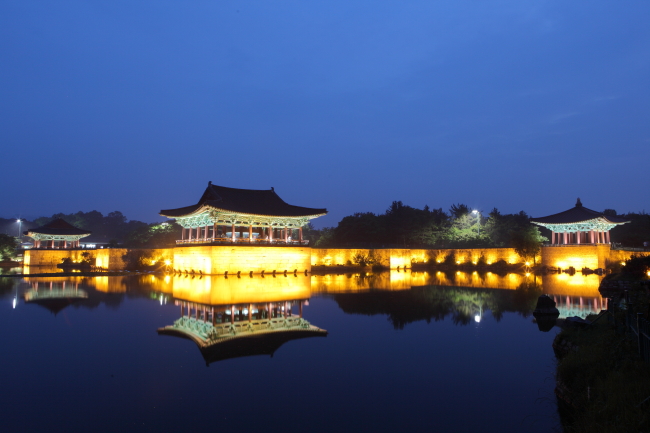 The night view of Anapji, an artificial pond constructed in 674 during the reign of King Munmu of Silla in today’s Gyeongju, North Gyeongsang Province (KTO)
Korea also has a number of traditional sites famous for their night views nationwide. Some of the sites the Korea Tourism Organization recommends include Anapji, an artificial pond in Gyeongju, North Gyeongsang Province, constructed in 674 and the Fortress Wall of Seoul, which was built in 1937 as protection from invaders.

On the last Saturday in June, dance clubs in Itaewon were flooded with those who wanted to bask in the invigorating ambience.

While looming speakers thundered with electronic dance music, a sea of guys in dress shirts, mostly in their 20s and 30s, were crammed around a dance floor watching ladies in glitzy dresses and high heels pole dancing.

“In this club, I can fully enjoy myself without having to care about what others think of me,” Yoon Hye-soo, 26, told The Korea Herald, queueing up with a friend to enter the club. 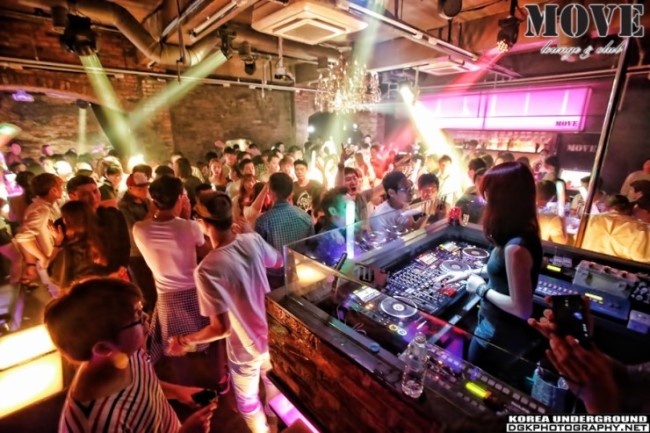 People dance in Club Move in Itaewon, Seoul. (Lounge & Club Move)
Taking her identification card and 10,000 won, the cover fee for the club, out of her purse, Yoon also talked about the main difference among three trendy club areas in Seoul ― Gangnam, Hongdae and Itaewon.

“I don’t like clubbing in Gangnam because it is too expensive, and you can only find young clubbers in Hongdae. So it leaves me no option but Itaewon,” the office worker said.

Stephanie Kovanda, a first-time clubber in Korea, agrees that Itaewon is where she can enjoy Seoul’s bustling nightlife.

“I was impressed that clubs here stay open later than many in the U.S. I can even have a drink while waiting in line for the club. It is a good spot for a fun night out,” the 27-year-old U.S. citizen said while stepping out of Move.