The title recognizes her excellent craftsmanship of extracting natural dyes of colors that are produced only through chemical dyes.

The honorable designation is awarded annually by the Korea Art and Culture Organization, one of the largest and oldest associations in Korea to promote Korean culture and art. So far, the organization has bestowed the title upon 66 master artisans in 13 different categories. 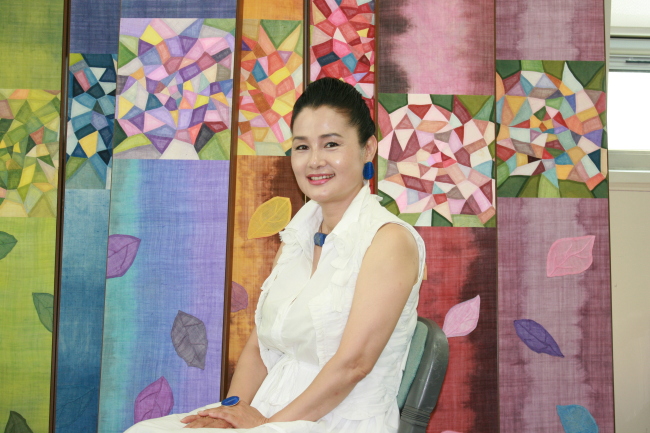 Choi Ae-ja, adjunct professor of Korean Traditional Costume at Konkuk University Graduate School of Design. (Media Inside)
Choi has showcased out-of-the-box art works, using wide ranging materials such as “hanji” (Korean handmade mulberry paper), silk, ramie fabric, cloth and thread. She infuses a unique and mysterious feel into textiles by coloring them with natural dyes and drying them in sunlight in a natural setting.

Her first work was “Koi Fish Painting,” in which she portrayed nine fish symbolizing great fortune and fecundity. She used tweezers to pick up each hanji piece to create each delicate and lively fish scale. The work won the grand prize at the annual Culture Ministry Awards in 2011 and was later displayed at the Cheongnamdae presidential village.

Her works, exemplifying a modern take on traditional art, maintain a good balance between past and present. They ripple out gentle yet not outdated, and colorful yet not light sensations.

Many of her works are currently exhibited at venues including Cheongnamdae, Sungshin Women’s University, the Korean Paper Museum and the Korean Cultural Center in Washington D.C.

She plans to open her own atelier and gallery in Yangpyeong, Gyeonggi Province in August, where she will focus on combining traditional craft with interior artwork. Her atelier will serve as a place to continue teaching Korean traditional textile arts and interior design to students and to meet larger audiences.

“I would like to pour my out passion to spread superb Korean traditional textile art out to the world,” Choi said.