But Nike, the world’s largest sporting goods maker, has refused to accept this concept. Instead, it has decided to begin a digitalization initiative for all aspects of its business ― everything from marketing to the product line-up.

“Innovation is always at the core of Nike. In order to stay ahead of the game and make the most of what we have, going digital is important,” Peter Kwak, general manager of Nike Korea, told The Korea Herald.

At its flagship store in the Gangnam Boulevard, one of the trendiest areas in Seoul, Nike has brought digital technology to another level. LCD navigators are located all over the store giving information on of Nike’s products and services.

The company has also gained much attention during the 2014 Brazil World Cup for its short animated film, “The Last Game,” where Wayne Rooney, Cristiano Ronaldo, Zlatan Ibrahimovic, Neymar Da Silva and other Nike-sponsored footballers save the sport from a scientist who devises a way to remove all the fun from the game. 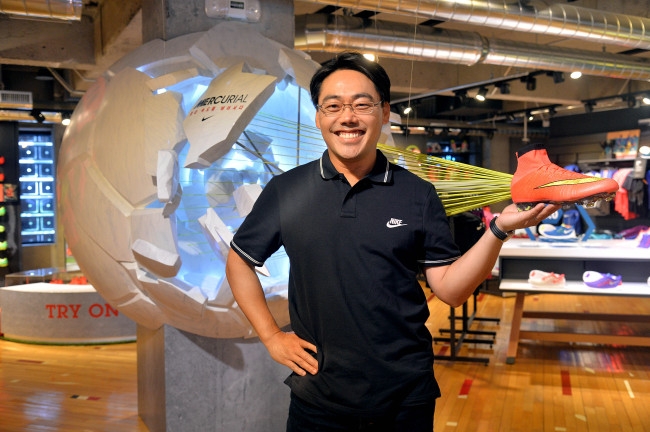 “Korean customers are very sophisticated and feel a great need to have a bond with the brand they choose. Digitalizing products is a perfect way to communicate with them and satisfy them. The global headquarters also keeps a close eye on our digital-related marketing and they are sometimes reflected to the global strategy,” the general manager said.

Nike Korea’s digitalization initiatives date far back in time, as they are the results of the firm’s determination to go beyond marketing.

In 2006, the firm released the Nike+ service, an activity tracking program that measures and records the distance and pace of a walk or run. A small transmitter is attached to or embedded in a shoe, and sends information to a Nike+ Sportband, an iPod, iPhone or a sportwatch.

Market analysts suggest that Nike should be placed among healthcare solutions firms or lifestyle firms now that the devices play an important role in preventive medicine.

“We will do whatever we can to enable our customers to stay physically active and fit,” Kwak said.

But going digital does not mean that Nike is abandoning its roots ― its sportswear business, which still brings in comfortable profit for the firm.

The Gangnam Store currently holds track meets for women every Tuesday evening, and Nike Korea will continue to hold its popular We Run and She Run events to introduce more Koreans to track.

“I wish I can tell what the future lies for us but I really don’t know,” Kwak said. “But one thing for sure: We have a lot of opportunities out there.”