“Kim was found to have cheated while writing all four articles that he submitted for promotion in the university,” said Rep. Yoo Eun-hae of the New Politics Alliance for Democracy. “Far from being appointed a minister, we cannot help but question whether he was qualified to be a professor.”

The former professor of Korea National University of Education has already been accused of plagiarizing a thesis by his student and colleagues to write papers that helped him get promotion. The opposition has made it clear that they will object to Kim’s appointment in light of the misconduct that has been revealed. 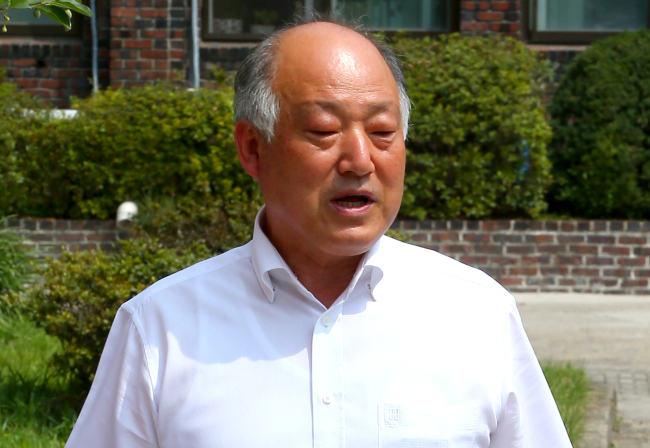 Education Minister-designate Kim Myung-soo
Kim is believed to have copied at least three other papers to write his thesis on the hiring process of education workers in elementary and middle schools, Yoo said. Of the 22 pages, eight were nearly exact replicas of others’ work, with only minor differences.

Stealing other people’s writing even left trails of logical errors in his paper, according to Yoo. In the paper, Kim said that the process of screening underqualified applicants had eight stages, but did not explain what the eight stages were.

Kim has supposedly violated the ethics code for Korean researchers five times since it was first introduced by the Education Ministry in July 2008, said Rep. Park Hong-keun of the NPAD. The violation of this code usually leads to the offender being disqualified from state-funded research projects.

Rep. Yoo Ki-hong of the same party raised another allegation that Kim had received excessive research funds while barely conducting any high-quality studies.

“It is being revealed that he is immoral and conducted many unlawful acts. We (the NPAD) will try our best to persuade the people of Korea that Kim is not qualified,” he said.

Ahn Cheol-soo, the coleader of the NPAD, has already made it clear that he wants President Park Geun-hye to withdraw Kim’s nomination.

The minor opposition Justice Party also released a statement Monday and urged Park to cancel his nomination and apologize to the people.

“There is ‘nothing more’ to expect from Kim as the head of the Education Ministry,” it said.

With scandal swirling around Kim, the ruling Saenuri Party indicated that they could cancel the nomination if the allegations turn out to be true and the people demand him to step down.

Other allegations for the embattled nominee include copying excerpts from his own paper to write another paper, exaggerating his resume and his work, taking credit for his students’ papers. He even participated in political funding, which professors of state-run universities are banned from doing.