Her eldest brother, six years her senior, had a great sense of humor. He sometimes danced like a fool in front of the family, if anything to make them forget their hardships and hunger just for a moment.

But Rep. Chun, as a little girl, never had imagined that her brother would burn himself to death to protest the abuse of factory laborers. Or that they would never have the house full of laughter again.

On Nov. 13, 1970, Chun Tae-il, then a 22-year-old tailor at Peace Market in Dongdaemun, Seoul, immolated himself in protest after witnessing female workers suffering from brutal working conditions and being exploited in the name of capitalism.

“They are not machines! Enforce the labor code!” he cried, after setting himself on fire.

Chun’s death was tragedy for his family and friends. But it became a catalyst in achieving workers’ basic rights and uniting workers to create trade unions later on.

The legacy of Chun still remains in many hearts as a remainder of the country’s dark history when the goal of economic prosperity oppressed basic human rights.

His sacrifice also remains as undying passion for Rep. Chun, keep pushing her to continue his brother’s unfinished work.

As compensation for her brother’s death, the family was offered enough money to pay her college tuition and pursue a comfortable life.

“I said we shouldn’t. Because my mother told us if we accept that money, we should forget about what he died for,” Rep. Chun said in an interview with The Korea Herald. 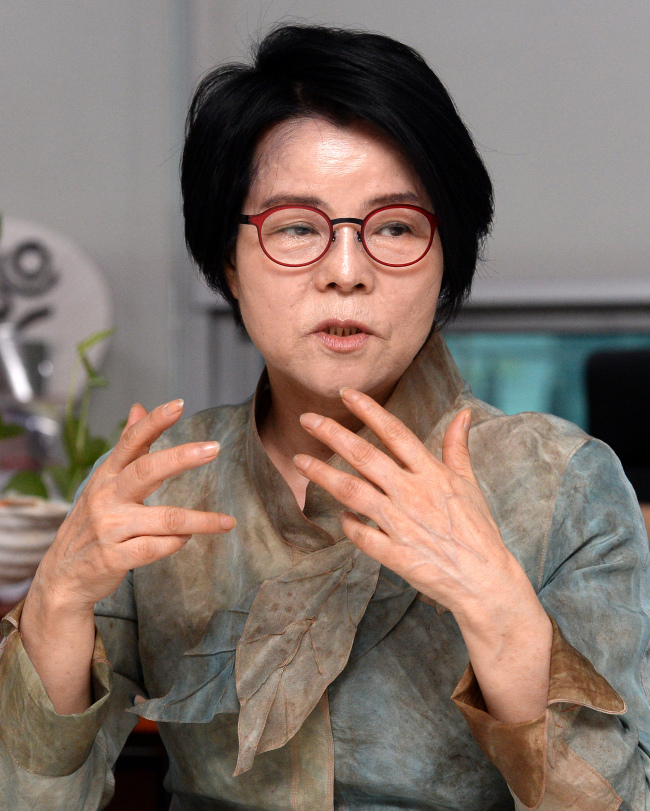 Rep. Chun Soon-ok of New Politics Alliance for Democracy (Ahn Hoon/The Korea Herald)
Her mother Lee So-sun became a labor activist in her own right and was arrested several times. Two years ago, Chun, who herself also was a longtime labor activist, became a member of the National Assembly. She was elected as proportional representative of the main opposition New Politics Alliance for Democracy.

“He had done what he had to do, letting the world know of the suffering of the laborers, at that time. The pain of others were his. … He stood up for them, out of love of the people,” she said.

“Like him, I want to be remembered as a person who shares the burden and understands the pain of others, in order to make the society a happier place to live in, not just for me, but for all.”

In the 44 years since her brother’s death, the country has experienced a dramatic transition, emerging from poverty to become one of the richest nations in the world. But the working conditions at small factories remain the same, she said. She believes that it is the predominant culture that prioritizes business success over workers’ rights that has failed to shed light on the present lives of laborers.

“Many things have changed. But workers at small businesses are still in pain like they were in 44 years ago.”

Working conditions have improved for white-collar workers at big companies as they are well educated enough to represent their own rights. But workers in small factories who have “fallen prey to the mass production system” remain “speechless” because they still live from hand to mouth, she said. 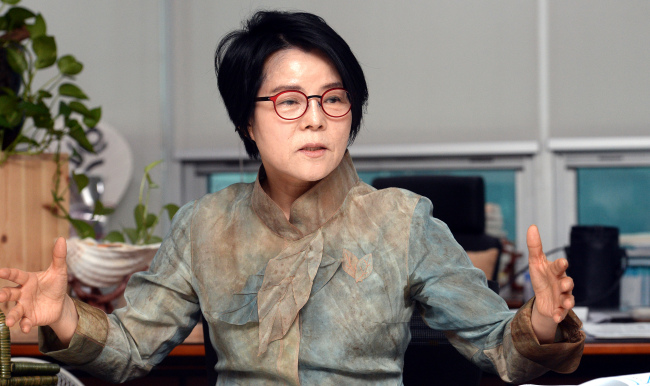 Rep. Chun Soon-ok (Ahn Hoon/The Korea Herald)
The 59-year-old lawmaker said she as on a mission to have their voices heard. She has visited 60 labor unions in the last two years to listen to workers’ demands and seek ways to improve their working conditions through legislation.

Asked of her mission on the presidential trip, she said she hoped to gain a mutual understanding with the government’s top executive. The interview was conducted three days before she left for the trip to three Central Asian countries.

“I think we have very different pasts,” she said.

“But I don’t want to call her a bad person just because we have different ways of thinking.”

When her brother died, Park’s father, President Park Chung-hee, was directing a conglomerate-centered economic policy. After her brother’s death, Rep. Chun worked in a textile factory as a teen. The junior Park went on to serve as the de facto first lady in 1974.

The two politicians’ first encounter was in 2012, when President Park tried to visit the Chun Tae-il foundation to show her support for labor rights as a conservative presidential candidate. Rep. Chun at the time said it would be better for Park to solve the country’s labor problems than simply visit the foundation.

It was hoped that earlier this month that Chun and Park would narrow not only their personal differences during the presidential tour, but also those between Cheong Wa Dae and the opposition.

Relations between Cheong Wa Dae and the opposition party have plunged to the lowest ebb since the Park took office in 2012.

“I do not think our ultimate goals are that different,” Rep. Chun said. “I think (the president and I) all want to make a happy Republic of Korea.”

But the opposition lawmaker urged the president to stop blaming others to avert the public criticism directed at the government for its poor handling of the Sewol disaster. The Park administration came under heavy criticism for its bungled response to the sinking of the passenger ferry that left nearly 300 killed.

In a tearful apology in May, Park said she would dismantle the Coast Guard for its poor initial response to the ferry disaster and hold those responsible to account, regardless of their ranks and authorities.

Rep. Chun claimed that the president has driven people into fear.

“As the commander-in-chief, she must hold herself responsible, although it wasn’t her fault. She should have embraced the pain and present the vision for better tomorrow so that the people could move on,” she said.

“The politics and the leadership must change first, not the people.”

The lawmaker said she was not interested in politics for many years. As the sister of an iconic labor activist, she had received constant approaches both from conservative and liberal political parties. She refused their offers even after she returned from the United Kingdom where she spent 12 years to study labor relations.

But it was factory workers who pushed her to enter politics.

“They told me that we were reaching the limit, even though we tried to improve the situation. They said they needed someone to represent workers’ rights, someone who could stand up for their dignity.”

But did she ever blame her brother for abandoning his own life?

“I did,” she said, recalling her last moment with her brother.

It was Nov. 12, 1970, a day before he committed suicide. He was leaving home early, she said, adding that she went after him because she needed some money to pay school tuition.

“I asked him: ‘When can you give me the money?’ He then gently stroked my head and said ‘I will have that money soon. Can you wait for me for a couple of days?’”

Despite her wishes, her brother never came back.

“He knew that he would never return to me.

“He was lying … just to comfort his little sister,” she said in tears.

● Elected as a proportional representative of the main opposition New Politics Alliance for Democracy in 2012.

● Started working at a textile factory as a machinist’s assistant at the age of 16, following the death of her brother, Chun Tae-il, a prominent labor activist.

● After 8 years working at factories, joined the labor movement, along with her mother Lee So-sun.

● Graduated in labor and social studies at Ruskin College, Oxford. Earned a master’s in industrial relations and a Ph.D. in the sociology of labor studies from the University of Warwick.

● Became a research professor at Sungkonghoe University. Despite a promising career as a scholar, launched a nonprofit organization to support female workers.