After his team was eliminated from the 2014 FIFA World Cup in Brazil with a 1-0 loss to Belgium, South Korean head coach Hong Myung-bo on Thursday blamed no one but himself. 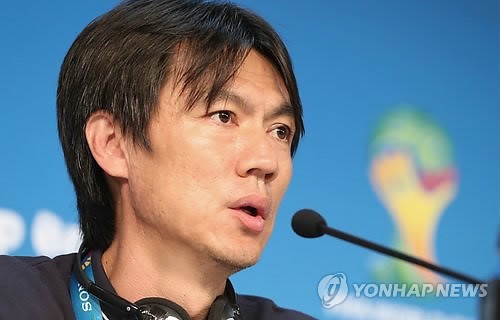 Hong Myeong-bo (Yonhap)
"I think our players did the best they could," he said at the post-match press conference. "More than anyone else, I had the most shortcomings. I have no problem with our players."

He declined to grade either himself or the team after South Korea went winless in matches in Group H. South Korea opened with a 1-1 draw with Russia, but lost to Algeria 4-2 before getting blanked by Belgium.

"I don't think it'd be appropriate for me to evaluate myself,"

Hong said. "But what I can say for certain is that I was at fault."

Belgium went down a man just before the end of the first half, but South Korea failed to capitalize on the man advantage. Hong, who substituted defensive midfielder Han Kook-young for forward Lee Keun-ho to start the second half, lamented his team's missed opportunities.

"Our players indeed became aggressive after the red card (on Steven Defour)," Hong said. "We could have created better chances if we had attacked the flanks. I felt we were trying too hard to penetrate up the middle."

Even though South Korea closed out the campaign without a victory, Hong said he has "no regrets."

"I suppose it's a bit disappointing that we fell apart in the first half against Algeria by giving up three goals," Hong recalled. "But overall, I think our players executed their tactics well. One positive thing to take from this is that our players have experienced a tournament as big as the World Cup."

A handful of head coaches have already resigned after their teams were eliminated, but Hong, who took over South Korea last June and is signed through the Asian Cup early next year, was noncommittal about his immediate future.

"I don't get swayed by other people's opinions when I make decisions," he said. "I am going to think about what the right course of action is for myself and decide accordingly."

Hong benched ineffective forward Park Chu-young to start the match and kept him there for the night, even as South Korea struggled to finish around the net. Hong appeared to have caved to mounting pressure to make the particular change, after Park managed just one shot in his first two matches and had been all but invisible.

Hong said he didn't have a separate meeting with Park before making the switch.

"I inserted players that I felt were necessary for this match," the coach said. "I think other players picked up the slack in his stead."

The winning Belgian coach, Marc Wilmots, credited his players with sticking together as a team after they went down a man.

Only four players who had started for Belgium against Russia last Sunday were back in the starting lineup against South Korea.

With injuries and yellow cards abound, Wilmots had earlier said he wanted to give fresh bodies a chance to play and foster a healthy competition within the team for playing minutes.

"This is a young team, and they have a very good foundation," Wilmots said. "I think they should continue on this foundation. The coach is doing a very good job." (Yonhap)