[ The Korea Herald – Send E-mail ]
Will elitist college system meet its demise?
Talks of drastic reform of the existing system emerge as left-leaning education chiefs arrive
By Yoon Min-sik
Published : Jun 26, 2014 - 21:05
Updated : Jun 26, 2014 - 21:05
With progressive candidates winning the majority of education chief positions in the June 4 elections, they were in a good position to promote their philosophy of less competition and equal learning opportunity for students.

As part of their mission, the left-leaning superintendents vowed a thorough revamp of the existing college system to form a public higher education network that eliminates disparity in entrance scores between state-run colleges.

The network will include Seoul National University, the country’s top-rated higher education institute, and allow whoever passes the national certification exam to enter any state-run colleges. 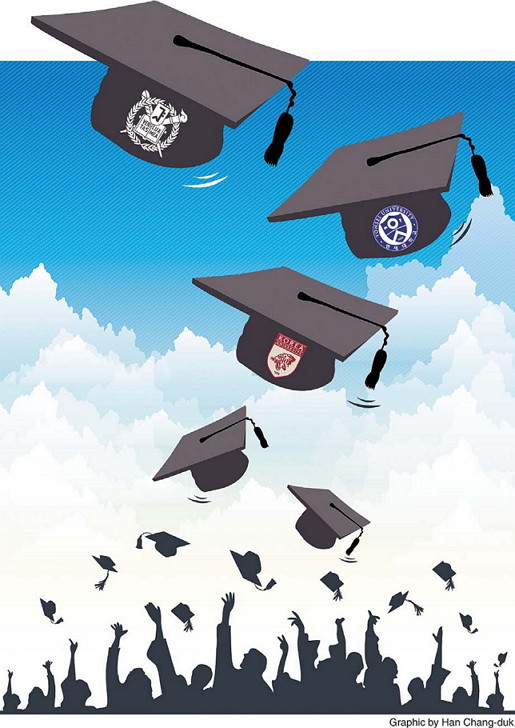 The herculean nature of the task ― which would include persuading the Education Ministry and schools themselves ― notwithstanding, many experts lauded their efforts as the elitist college system has long been the subject of criticism.

It has been blamed for promoting excessive competition that undermines the true purpose of education. Another problem is that the reputation of one’s diploma often has a lasting impact on his or her life.

In order to go to a prestigious college, a student needs to get a high score on the annual entrance exam Suneung. To get a high score, one needs to spend hours upon hours on rote learning that is largely deprived of creative thinking.

“During my time at a university, a lot of professors told me addressing the students was like ‘talking to dolls.’ When asked to state their opinions, they all keep their mouths shut,” said Jang Hwi-kook, the recently reelected education chief for Gwangju. “This is because the students are used to a method of studying that is based on simple memorization of facts.”

Hardly anyone can deny that Korean students work hard.

The education fever in Korea has earned plenty of admirers outside the country, including U.S. President Barack Obama. A recent report from the Organization of Economic Cooperation and Development showed that the country had the third-highest rate of education expenditure per GDP among all OECD countries.

But the report also showed that Korea topped the list of private education expenses. The majority of private institutes in Korea are custom-designed to help students get high scores in tests, which is their selling point.

“The current evaluation system is less about teaching and more about lining them up in the order of their scores,” said Lee Bohm, a former education policy adviser for former Seoul education chief Kwak No-hyun. The easiest way to do it is to test them on how well they memorize the facts, he said.

“Private institutes know very well how to deal with such tests. This means private education will continue to thrive.”

Much of the intense competition is caused by the merits of entering prestigious universities.

“The current system induces a pecking order among students based on the name of their colleges, which is virtually impossible to overcome,” said An Sang-jin, an official of the World Without Worries About Private Education.

Because of the efforts students put into college entrance, students at top-tier schools often have a sense of superiority that goes beyond the usual pride in one’s alma mater. The college rankings, based on how difficult it is to enter the respective schools, effectively forms a caste system for students.

The rankings often become a source of bitter arguments, and can sometimes lead to legal disputes. Earlier this month, two of the higher-ranked Seoul-based universities sued each other’s students for slander.

Discrimination based on college reputation extends beyond campus. Most people believe that graduating from Seoul National University, Korea University and Yonsei University, or “SKY” universities, is a surefire way to success. According to the Ministry of Justice, about 85.7 percent of the newly appointed prosecutors in 2012 were graduates of SKY universities.

The diploma can do more than fetch jobs. The word “pure blood” has a unique connotation in Korea, as institutes like SNU College of Education has an unofficial custom of hiring only its alumni as professors.

With so much at stake, students and parents alike become obsessed with entering a prestigious college, leaving no room for other important aspects of education like character development and gaining a variety of experiences.

Entering a top-tier school, however, does not always lead to a fairytale ending. Over half of the students at the SNU said they were disappointed by the school’s programs based on uninspired lectures that simply inject students with information.

“College programs are all pretty much similar to each other, lacking innovative ideas. This means companies’ hiring process relies heavily on the name value of the university that an applicant graduated from,” said An Sang-jin. “As a result, a single sorting process ― college entrance ― directly impacts pretty much the rest of the students’ lives.

“In my opinion, getting into college should not be the biggest competition of a person’s life.”