As Korea undertakes the final preparations to host the 17th Asian Games in Incheon, Kim seeks to document, for the first time, the decades-long history of the biggest global sports event in Asia through a photography exhibition to be held in Incheon during the upcoming games.

“The exhibit seeks to look back on the history of the Asian Games and the achievements of the Olympic Council of Asia, which has overseen the successful execution of the large-scale event in Asia over the last (six) decades,” said Kim Min-jae in an interview with The Korea Herald on Monday. 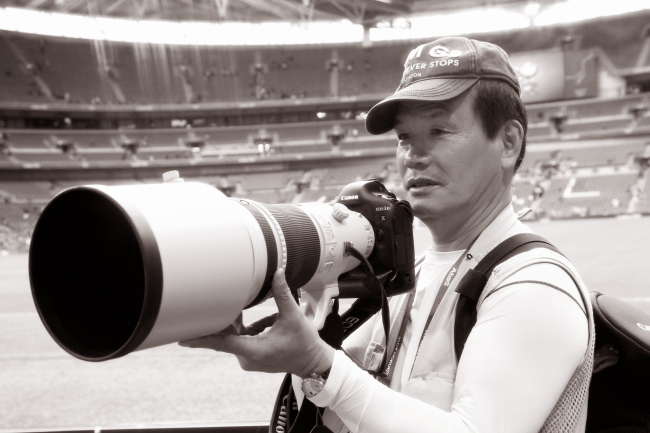 “Since this year’s Asian Games will be held in South Korea, home turf for me, I thought that it was the right time to prepare such an exhibit,” he said.

Titled “Memories of OCA in Photography,” the exhibition will spotlight the recent developments in major international sports events executed by the OCA with over 250 photographs mostly taken by Kim. A photography book of the exhibit which more specifically details the work of the OCA will be published as well.

The main part of the exhibit will feature memorable moments from the Asian Games, the Winter Asian Games and the recently launched Asian Beach Games, as well as scenes from important OCA meetings and sessions that made the execution of these events possible.

Other parts of the display will include an overview of the efforts made by the Incheon Asian Games Organizing Committee in preparation for the upcoming Asian Games and a section dedicated to celebrating achievements made by Asian athletes in past Olympics.

Kim was able to prepare the exhibition thanks to his extensive background as a sports photographer. Though he has only worked for the OCA since 2013, photographing the president and key meetings related to the international body, Kim spent most of his career taking pictures for the South Korean Ministry of Sports, Culture and Tourism.

As a ministry photographer, Kim was at the scene of every major sports event in Asia, beginning with the 1986 Seoul Asian Games and the 1988 Seoul Olympics, all the way up to the 2010 Guangzhou Asian Games and now the 2014 Incheon Asian Games.

“I can say that I have stood by just about every international sports event held in Asia in the past three decades. And every time, I have covered the Asian Games from different positions and angles, sometimes capturing key sports matches and at other times, taking press photographs or promotional images for the government,” Kim said.

“Taken together, these photographs can chronicle the development of the Asian Games and highlight the legacy and the achievements of the OCA,” said the veteran photographer. “I have attended seven Asian Games so far. And every time, it’s amazing to see how much the event has expanded and grown.”

“Memories of OCA in Photography” will be available at the temporary OCA headquarters during the 17th Asian Games, which will run from Sept. 19 through Oct. 4 in Incheon, South Korea.