[ The Korea Herald – Send E-mail ]
Ministry vows to punish defiant teachers’ union
By Yoon Min-sik
Published : Jun 23, 2014 - 20:58
Updated : Jun 23, 2014 - 20:58
The Education Ministry sent a warning Monday to members of the Korean Teachers and Education Workers Union, saying they will be “sternly punished” if they choose to participate in antigovernment activities.

The announcement made early in the day aggravated the ongoing feud between the government and the recently banned union. On Sunday, the KTU said it would not comply with the government’s decision to revoke its legal status, and vowed an “all-out struggle” against what it called unfair repression by the authorities.

It announced a series of plans to protest the government action. To kick things off, teachers who are members of the progressive teachers’ group will take an early leave from school on Friday to participate in a demonstration near Seoul Station, central Seoul.

“The KTU’s plans can result in the violation of related laws, and there are serious concerns that they may also infringe upon the students’ right to take classes and to learn,” said Vice Education Minister Na Seung-il during a meeting with officials from local education offices in Sejong City. The meeting was held to discuss follow-up measures to deal with group. 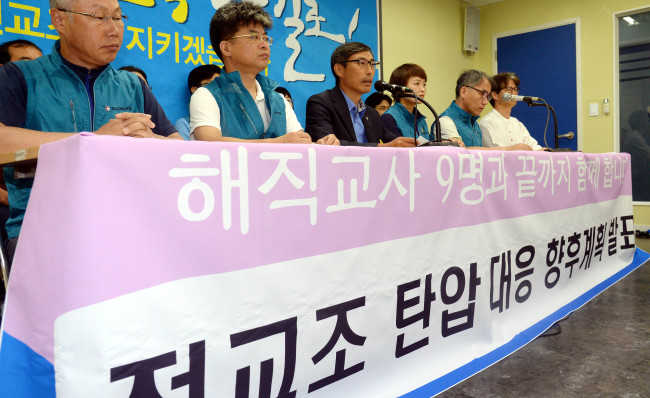 Kim Jeong-hoon, the president of the Korean Teachers and Education Workers Union, speaks during a press conference at its headquarters in Seoul on Monday. (Ahn Hoon/The Korea Herald)
Na added that teachers who participated in the joint measure would violate the law prohibiting civil servants from taking part in collective action, and would be subject to disciplinary action. He urged officials to take “preventive measures” to make sure the teachers did not take part in the KTU rally.

Since the KTU was labelled an illegal group, the government said it would withdraw all support, order all full-time KTU members to return to their teaching posts by July 3 and ban the group from collecting membership fees.

But the KTU appeared unfazed by the ministry’s tough rhetoric. The group appealed a Seoul court’s ruling Thursday in favor of the government’s attempt to strip it of legal status.

“The Education Ministry announced a slew of repressive measures toward the KTU, as if it had been waiting for the court’s decision and alerted education offices,” Kim Jeong-hoon, president of the KTU, said in a press conference in Seoul. “The government measures are not against the struggles of the KTU. This is essentially oppression against our efforts to change the education system, oppression against the collective demand of the people of Korea.”

At the press conference the KTU reiterated its demands, including restoration of its legal status, revising the law that prevents sacked teachers from joining a union, and the withdrawal of the controversial nomination of Kim Myung-soo as Education Minister.

For now, it is still unclear whether the group will receive the backing of progressive education chiefs, although several of them vowed to recognize the KTU as a legitimate group. Cho Hi-yeon, the education superintendent-elect for Seoul, said he was still mulling whether to comply with the government’s stance on the KTU, as are other education chiefs across the country.

Despite their tentative initial reactions, it is still likely that progressive superintendents will support the KTU, as they share similar views on most major policies, such as providing equal learning opportunities and promoting welfare in schools.