[ The Korea Herald – Send E-mail ]
[Newsmaker] Teachers’ union to fight for legal status
By Yoon Min-sik
Published : Jun 22, 2014 - 20:56
Updated : Jun 22, 2014 - 21:10
The Korean Teachers and Education Workers’ Union on Sunday said it will fight the court’s recent decision to renounce its legal status, as a years-long feud between the left-leaning union and government deepened.

On Thursday, a Seoul court ruled that the controversial union is not a legitimate labor group because it violated the labor law that bans dismissed education workers from joining unions. Later in the day, the Education Ministry announced a series of follow-up measures which include withdrawing all governmental support, banning it from collecting membership fees and ordering full-time members to return to their teaching posts.

“We’ve decided to refuse all of the Education Ministry’s measures. It was also decided at an undisclosed staff meeting that none of the full-time members will return to their posts,” the KTU said in a press release. “Outlawing the KTU is an act of violence which goes against the idea of the labor (movement)….We will fight to protect the KTU and the ‘true education’ it represents.” 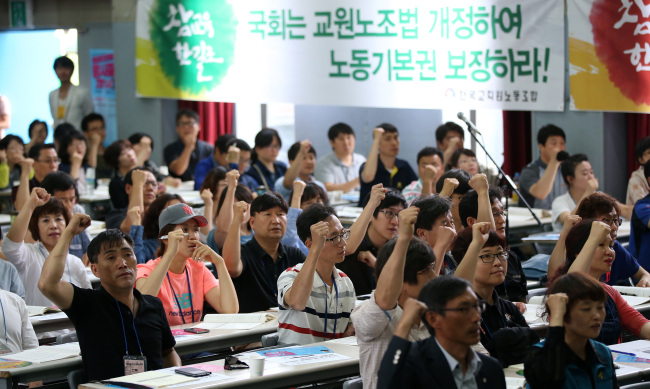 Members the Korean Teachers and Education Workers’ Union on Saturday shout slogans as they hold meetings to discuss the countermeasures for Thursday’s court ruling, in which the group was stripped of its legal status. (Yonhap)
The group also agreed on a slew of anti-government protests, which will commence later this week.

The KTU decided to kick off a fundraiser to pay for its campaigns and subsequent activities, as the Education Ministry revoked its right to collect membership fees.

It will announce the details for its campaigns early Monday, and will appeal Thursday’s ruling later in the day.

The moves are expected to further corrode the less-than-friendly relationship between the government authorities and the group. The Education Ministry had already labelled the KTU teachers’ plan for an early leave on Friday “an illegal collective action,” and notified provincial education offices to prevent teachers from participating.

But the KTU incident is more than a struggle between the government and a wayward trade union; it represents growing friction within the education circles that grew exponentially within the last few weeks.

On the coattails of Thursday’s ruling, several education superintendents across the country had vowed to continue to treat the KTU as a legitimate organization despite the government’s orders to do otherwise. These education chiefs are widely recognized as “progressives,” who share the idea of egalitarian education opportunities with the KTU.

Of the 17 education chiefs in Korea, 13 are progressives and eight are former members of the KTU, which means the Education Ministry will have a tough time forcing the local education offices to comply with its orders. The progressives have been at odds with the government over the KTU and its major policies including free school lunch programs, elite high schools and the teachers’ right to publicly express political opinions.

The government, however, appeared determined not to give in to its new adversaries, nominating Kim Myung-soo, a former professor known for his ultraconservative views, as the new education minister.

With neither side showing signs of backing down, the commotion within the education circles appears far from over, as the country braces itself for another drawn-out strife.