The agency plans to transform the region into an industrial and logistics hub of Northeast Asia by boosting its competitiveness in the race for foreign investments against China, the world’s single largest market, and Japan, the world’s second-largest economy, according to the authority.

At the Mieum District of Jisa Area, part of the BJFEZ that is chiefly responsible for high-tech industries, lies a foreign investment zone that has been inviting many global and multinational companies to enter and construct factories.

“At our new facility in Mieum District, we are not only able to manufacture our products, but we are also able to get involved in the engineering, development and distribution process thanks to the various infrastructures that are readily available,” said a company official from Bosch Rexroth, a German engineering firm.

Bosch Rexroth, a global company founded in 2001 that specializes in hydraulics for heavy industry equipment, had 6.5 billion euros ($8.9 billion) in sales and 37,500 employees as of 2012. 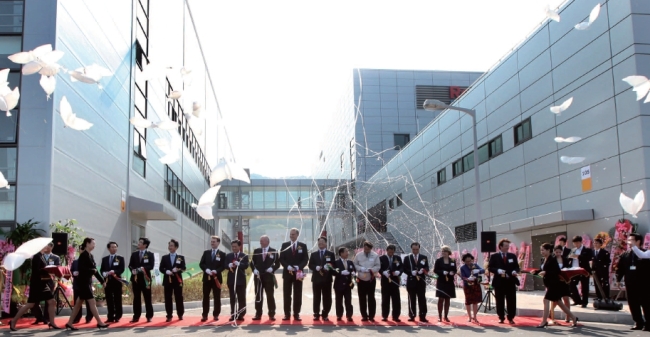 Officials from Bosch Rexroth Korea and Busan City host a factory completion ceremony at the Mieum Parts Industrial Complex, in Busan-Jinhae Free Economic Zone, in October 2013. (Busan City)
In need of a larger-capacity factory, the company established one covering an area of 17,000 square meters in Mieum District through an investment of $412 million, helping to create new jobs and vitalize the local economy.

“Considering the poor market conditions such as the low growth in industrial production, diminished demand from Japan and the slowed economy of primary export countries, the BJFEZ is showing satisfactory results,” the official added.

“The signals we are receiving from the shipbuilding market and the potential we see from local clients will prove to be valuable opportunities for decent competition.”

At another part of the district is the manufacturing facility of Geislinger, an Austrian-based couplings and dampers supplier, which invested about $105 million in the BJFEZ.

The Austrian company also singled out the logistics infrastructure as one of the greatest advantages, along with easy access to quality human resources.

Both companies, however, pointed out that compared to the BJFEZ’s other infrastructure, the roads and transportation still need improvement.

“The transportation infrastructure still falls slightly short of others,” said the Bosch Rexroth official. “While the industrial and residential areas are extremely well-developed, lots of precious time and energy are being wasted in unnecessary traffic congestion.”

Geislinger added that the financial, trade and education infrastructure was not on par with that of Seoul.

With five companies already fully operating their factories and two more underway, there is currently about 156,000 square meters left of the 332,000 square meters in the foreign investment zone of Mieum district.

The BJFEZ was conceived by the central government in 2004 as part of recovery efforts following the aftermath of the financial crisis nearly two decades ago. 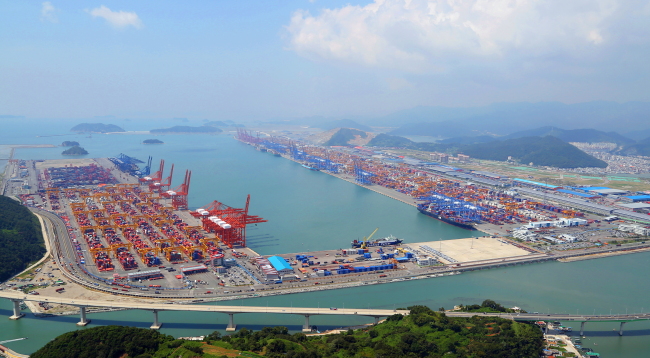 Busan New Port
The BJFEZ is divided into five areas ― New Port, Myeongji, Jisa, Dudong and Ungdong ― which are further divided into 21 districts.

Each area has a distinct vision and role to play within the economic zone.

Busan’s New Port is the logistical hub, bringing ports, railways, roads and airports together; Myeongji is the zone’s international business town; Jisa is the science and high-tech industrial complex; Dudong is the main education, research and residential area; and Ungdong is the core for tourism, leisure and other recreational sectors.

The BJFEZ, which will largely be developed in three phases, is expected to ultimately reach a population of 243,000 people when it is completed, before or during 2020.