[ The Korea Herald – Send E-mail ]
[Herald Interview] Carver sees opportunities in China
By Seo Jee-yeon
Published : Jun 19, 2014 - 21:06
Updated : Jun 19, 2014 - 21:08
Small and mid-sized South Korean beauty brands, which are in a neck and neck race in South Korea, have been turning their eyes to China for a while now to capitalize on the burgeoning demand for high-quality beauty products that are still affordable.

Carver Korea is one such company that is working its way into the market.

“China is a tough market to get into, but it is also a mine of opportunities,’’ Carver Korea director Ahn Jang-kyun said in an interview with The Korea Herald, noting that the Chinese cosmetics industry was worth up to $22 billion.

Carver, an operator of seven cosmetics brands including A.H.C., Shara Shara and VIVITO sells some of its products via home-shopping channels in China. 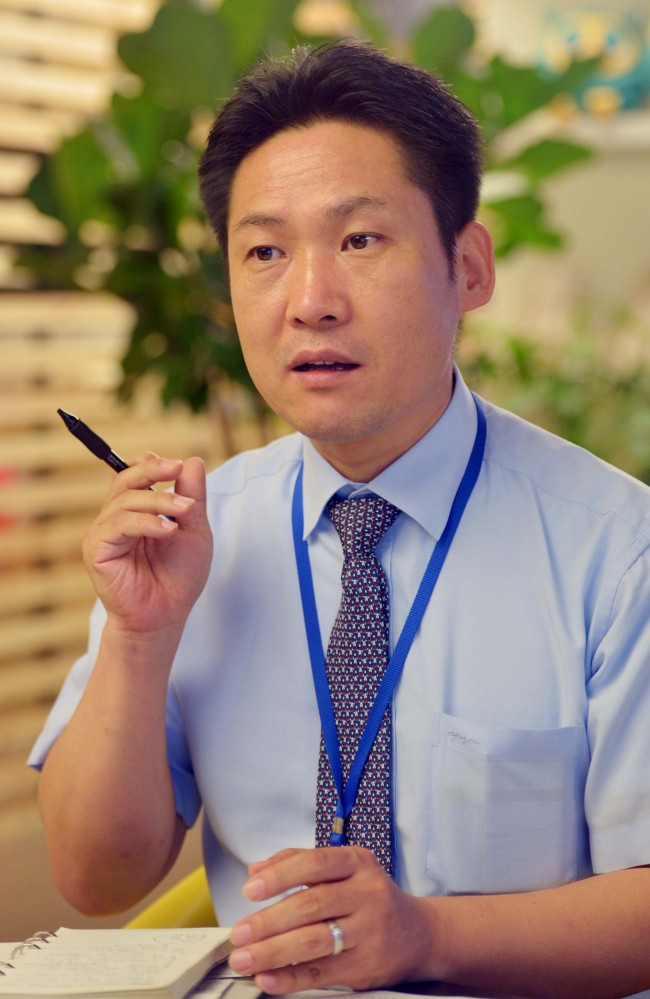 Ahn Jang-kyun (Kim Myung-sub/The Korea Herald)
“We were challenged by China’s tight regulations applied to imported beauty brands, but we’re taking a step-by-step approach to raise brand recognition in one of the fastest-growing beauty markets in the world,” Ahn said.

As of 2011, Carver Korea was hauling in an annual 20 billion won ($19.5 million) in worldwide sales. This year, Carver expects to reap 100 billion won in global sales, with the figure expected to vary depending on how much of the Chinese market it is able to secure.

Carver has a positive outlook on its future growth, mainly due to confidence in product quality. The director stressed that there was no compromise in quality. At the same time, however, the beauty firm is aggressively seeking to cut costs to maintain reasonably high profit margins.

In terms of sales strategies, it has been striving to differentiate itself from other players in the market by joining up with makeup-savvy power bloggers. One of the results has been the Unni Recipe, the brand name for Carver’s latest makeup range. The name comes from the fact that “unnis,” meaning “older sisters” in Korean, helped come up with the idea of effective skincare products at an affordable price.

Carver is also betting on more men opening up their wallets, which is why it introduced men’s products for its brands Shara Shara and A.H.C.

Overall, the director was confident about the company’s success, as the beauty industry is growing continuously.