After joining popular hip-hop label Brand New Music shortly after his departure from JYPE, the artist released a single “Story of Someone I Know,” which topped local music charts. His newest single “A Midsummer Night’s Sweetness,” a duet with After School’s Raina, also claimed the No. 1 spot upon its release on June 12.

The hip-hop star, whose real name is Chong San, says he is living his dream after a difficult journey to the top.

“If I hadn’t become a rapper, I would probably be running a Laundromat, selling cellphones or working at a (chicken) wing place,” the 29-year-old told The Korea Herald. 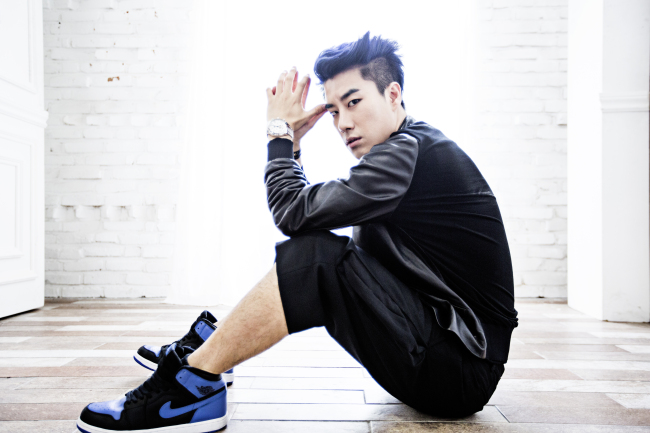 San E (Courtesy of Brand New Music)
“People who aspire to enter this field will always have to decide between reality and their dream. My parents would say ‘San, there are tens of thousands of kids just like you in Korea who want to rap. Go out there, get a job and make some money.’”

With one semester of university left, the rapper decided to take one last stab at his dream.

“It wasn’t like we had money or any connections in the entertainment industry. But I didn’t want to wake up one day, when I’m 30, and regret everything about my life.”

The rapper uploaded original tracks on his blog and promoted them to online hip-hop communities. When the blog failed to draw an audience, he decided to take a chance and poke fun at a fellow underground artist.

“I decided to target Verbal Jint, because he’s always been an issue-maker. It’s because he has a terrible character,” he joked.

The decision paid off when the track caught the attention of hip-hop fans and underground rappers, including Verbal Jint, who was so impressed that he wanted to scout San E.

“San E’s music was sensational in Korea,” said Rhymer, president and chief producer of Brand New Music, where San E and Verbal Jint are both signed.

“Even though Verbal Jint got dissed, he thought highly of San E’s music and wanted to work with him. And that made San E famous, which eventually led to a contract with JYP Entertainment.”

With one year left before he reaches 30, San E says, “I have no regrets. I’m living my dream.”

In addition to promoting his latest single, San E has a few other projects in the works.

“It’s more intense this year,” the artist said about the show’s participants. “There are a lot more talented artists this time.”

The artist is also planning a global video project called “Hip-hop is Hip-hop,” which features about 15 rappers from all over the world. The video is slated to be released in October.