[ The Korea Herald – Send E-mail ]
[Ferry Disaster] Arrest warrant issued for Sewol ferry owner
By Kim Yon-se
Published : May 22, 2014 - 20:33
Updated : May 27, 2015 - 17:17
The prosecution has rolled up its sleeves in its efforts to seize the de facto owner of the ill-fated ferry Sewol after it failed to capture him despite a raid by investigators on his religious compound a day before.

Investigators are expected to conduct a full-fledged search for Yoo Byung-eun as the Incheon District Court on Thursday approved the arrest warrant for the ex-Semo Group chief, who is suspected of engaging in a variety of business malpractices.

In its unveiling of the background for issuance of the warrant, the court cited that “Yoo is believed to have (already) fled. And there are also concerns about destruction of evidence.” 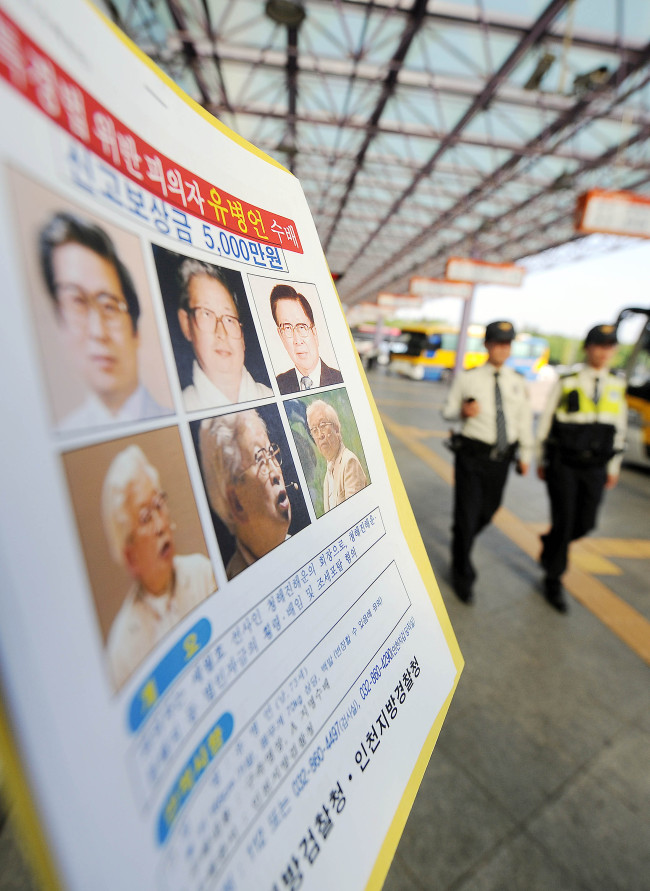 Wanted posters for Yoo Byung-eon and his son Dae-gyun. ( Yonhap)
The prosecution, which had failed to determine Yoo’s whereabouts, called on the court to issue the arrest warrant immediately though there should ordinarily be a court interrogation process before approval or rejection.

The court accepted the proposal and issued the warrant after only reviewing related documents on allegations against the 73-year-old business tycoon, including embezzlement, breach of trust and tax evasion.

The expiry date of the warrant for Yoo is July 22, while an ordinary warrant matures one week after the issuance date.

Along with attempting to locate his hideout, prosecutors have embarked on the process of confiscating the wealth of Yoo and his family.

According to criminal and tax authorities, their illicit financial transactions are estimated to have reached 100 billion won ($95 million).

Later on in the day, the police said they would place Yoo and his oldest son, Dae-gyun, on a nationwide wanted list and distribute posters of them, offering an 80 million won cash reward.

Police offered a 50 million won and 30 million won reward for helping law enforcement authorities arrest Yoo and his son, respectively. In a statement, the National Police Agency asked the people to actively provide information leading to their capture.

Over the past few weeks, investigators have sought to determine whether Yoo and his children exploited Chonghaejin Marine Co., the operator of the Sewol ferry, as a source of irregular income to stash away. His family, however, did not respond to the prosecution’s recent summons.

Key allegations included that Yoo, whose two sons own stakes in the firm through dozens of sister firms, is responsible for lax safety practices, such as cargo overloading, and created circumstances that ultimately triggered the sinking of the ferry.

Yoo and his two sons are also under the suspicion of misusing three paper companies to create slush funds and illicitly transfer money abroad by pocketing company funds.

The prosecution, which failed to find Yoo in Geumsuwon, a religious compound in Anseong, Gyeonggi Province, has reportedly secured a list of Yoo’s followers.

An attorney said during a televised debate on Thursday that “some of ex-chairman Yoo’s followers could become whistleblowers in order to receive the cash reward offered by police.”

He alleged that some less ardent devotees of the Salvation Sect, which is allegedly led by the former Semo Group chairman, could offer significant information to help authorities capture and eventually indict Yoo.