[ The Korea Herald – Send E-mail ]
[Ferry Disaster] Sewol owner may have fled church compound
By Kim Yon-se
Published : May 20, 2014 - 21:27
Updated : May 27, 2015 - 17:12
Prosecutors on Tuesday raised the possibility that Yoo Byung-eon, the de facto owner of the sunken ferry Sewol, is hiding out at a residence of a member of the Evangelical Baptist Church, dubbed the Salvation Sect, which is allegedly led by the former chief of the now-defunct Semo Group.

The prosecution said that Yoo appears to have already escaped from Geumsuwon, the sect‘s headquarters in Anseong, Gyeonggi Province, in a low-key manner. It alleged that he is residing at a follower’s house in Seoul.

The speculation of his retreat comes after Yoo failed to appear at a court hearing on the day. The Incheon District Court held a hearing to review the prosecution’s request for an arrest warrant against the 73-year-old business tycoon. 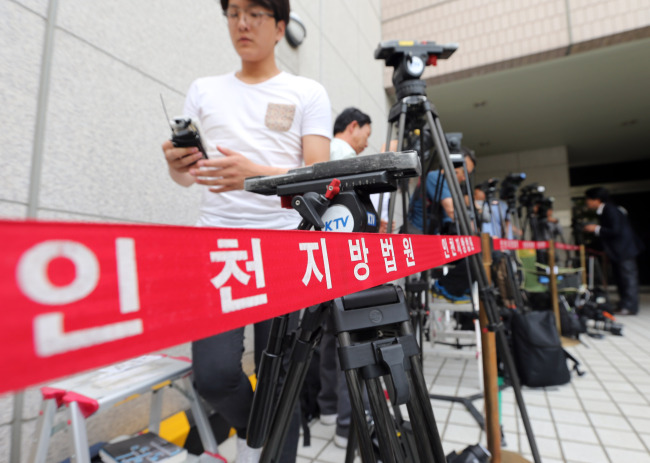 Reporters wait for Yoo Byung-eon, the de facto owner of the sunken ferry Sewol, to appear at an Incheon court hearing Tuesday on whether to arrest him. Yoo did not show up. (Yonhap)
According to the Sewol investigation task force, a special team of more than 40 detectives has been formed to track down Yoo and bring him into custody.

Prosecutors expect that the warrant for Yoo’s arrest will be issued Thursday or Friday.

Yoo and his two sons are facing possible charges of embezzlement, bribery and tax evasion involving some 100 billion won of assets.

They have continued to evade authorities after repeatedly disobeying prosecutors’ summonses, with the oldest son Dae-gyun now placed on a nationwide wanted list.

The prosecution had planned to forcibly enter the compound, pending the court’s approval for his arrest warrant. About 4,000 riot police, fire fighters and emergency medical staff were deployed in preparation for the upcoming raid.

Meanwhile, investigators have seized assets held by Yoo, who has been suspected of committing a variety of irregularities during his management of the now-defunct Semo Group and Chonghaejin Marine Co., the operator of the Sewol ferry.

The court said Tuesday that it had approved the proposal by the prosecution and the National Tax Service to place Yoo and his oldest son Dae-gyun’s real estate assets worth 20 billion won ($19 million) under confiscation.

Among the properties was land in the Seocho and Gangnam districts of southern Seoul and two business offices in Gangnam-gu.

Officials at the tax agency NTS noted that the policy reflects the Park Geun-hye administration’s pledge to exercise the right to indemnity against the former Semo Group chairman and Chonghaejin Marine as soon as the state compensates victims’ families.

As the combined damages from the ferry disaster, which left more than 300 dead or missing, are estimated to reach 2 trillion won, the investigative agencies are expected to seek to confiscate more of the Yoo family’s assets.

Apart from the ferry accident, Chonghaejin Marine has allegedly engaged in illicit money transfers to foreign countries, received bank loans in a dubious manner and falsified financial statements, according to financial regulators.