[ The Korea Herald – Send E-mail ]
[Ferry Disaster] Sewol sailors indicted on homicide charges
By Lee Hyun-jeong
Published : May 15, 2014 - 21:03
Updated : May 15, 2014 - 23:21
The captain of the Sewol and three other key crew members were charged with manslaughter Thursday. The 11 other sailors were indicted on less serious charges of negligence.

The four key sailors ― the captain, chief mate, second mate and chief engineer ― were charged with homicide out of willful negligence. All crewmen are accused of violating the rescue rule and of negligence resulting in death.

“(The investigation team) charged the captain with homicide because he did not take any measures in the whole process, from the steering to the passengers’ evacuation, despite being responsible for operating the ferry and the safety of the passengers,” said the investigators in an interim report.

The 68-year old captain is also charged with a number of additional charges including attempted murder, professional negligence and violating the Seafarers Act. The same charges were applied to the chief mate. 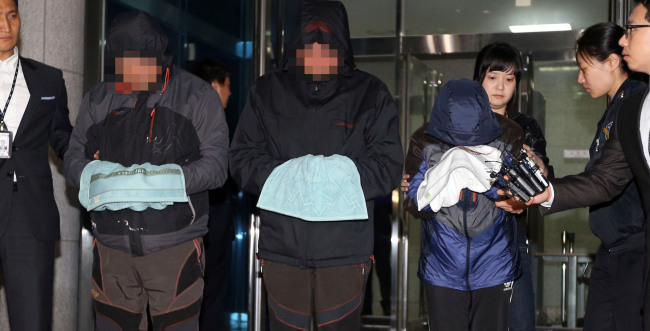 The captain (left) of the Sewol and other crew members walk out of a court room after attending a deliberation session on the issuance of arrest warrants against them last month. (Yonhap)
The sailors had told the passengers to stay inside the cabins while they were preparing for the evacuation, the survivors said.

The crew members were the first to be saved by maritime police 40 minutes after the accident.

While the ferry had announcement equipment and emergency bells to notify passengers of the situation, the first chief surnamed Kang had falsely claimed that the equipment was out of order, the investigators said.

Without announcing any information to the passengers, the sailors gathered in a crew-only hallway in the ship and waited to be rescued, the investigators said.

It was also revealed later that the rescued crewmen neglected two wounded colleagues when evacuating. The two are still missing.

If convicted of homicide, the sailors could be sentenced to death or more than five years in prison.

Whether the four key sailors can be convicted of the murder charge, however, remains unclear.

The prosecution has to prove that the sailors’ actions were intentional and the causality between their behavior and the deaths of those onboard based on concrete evidence, observers said.

There is no precedent for this case in Korea, in which the prosecution has charged a suspect with homicide for massive deaths in a large accident.

As of Thursday, the death toll stood at 282, with 22 still missing. Most of the passengers were teenagers from a single high school.

The prosecution is planning to indict additional ferry-related officials once another probe into the overloaded cargo and poor monitoring of safety measures is wrapped up, the prosecution said. A total of eight officials have been detained for the investigation.

Suspicions have grown that the ship’s ability to right itself was allegedly affected by the overloaded cargo, leading to the deaths of hundreds. It was also reported that the freight was not firmly secured inside the ship.

The investigators are also expected to widen the probe next week into the maritime police. The Coast Guard is accused of poor rescue operations at the scene.

In its interim unveiling of results of the investigation into the marine company and its affiliates, the Financial Supervisory Service said 42 financial firms have signed loans contracts with the embattled group.

“The 42 firms’ outstanding loans to Chonghaejin Marine, its sister firms and affiliated individuals came to 374.7 billion won ($356 million),” the FSS said in a statement.

The first-tier banking sector topped the list as 13 commercial banks issued loans to them, followed by mutual finance firms with 11, credit card firms with eight, insurers with three, savings banks with one and six other sort of lenders.

An official said some lenders were found to have overestimated the profitability of the marine group and conducted negligent reviews on collateral.

“We’ve found that a lender offered them an extension of loan maturity despite arrears in the payment of interest,” he said.