[ The Korea Herald – Send E-mail ]
Kim Sung-ryung returns to stage
Actress to play three roles in adaptation of French play
By Korea Herald
Published : May 15, 2014 - 20:26
Updated : May 15, 2014 - 20:27
Popular TV and film actress Kim Sung-ryung is returning to the stage after seven years away, following the recent release of her latest films “The Fatal Encounter” and “The Target.”

Starting Thursday, Kim is starring in “Miss France,” a Korean adaptation of the French comic play “Jamais 2 Sans 2.” The last time she performed in theater was back in 2007, in “Melodrama.”

In the play, Kim takes on three different roles at once. She first appears as Fleur de Senlis, the president of a local pageant committee in France and a former contest winner. The character loses the ability to speak after learning that the winner of last year’s pageant posed nude for a pornographic magazine. The whole committee is embarrassed.

The organizers of the beauty contest try to find Fleur’s replacement in order to have her speak at a press conference ― so they can save face. They learn that Fleur has a twin sister, Samantha, who works as a club dancer, and Martin, a housekeeper at a hotel, also looks very much like their boss. 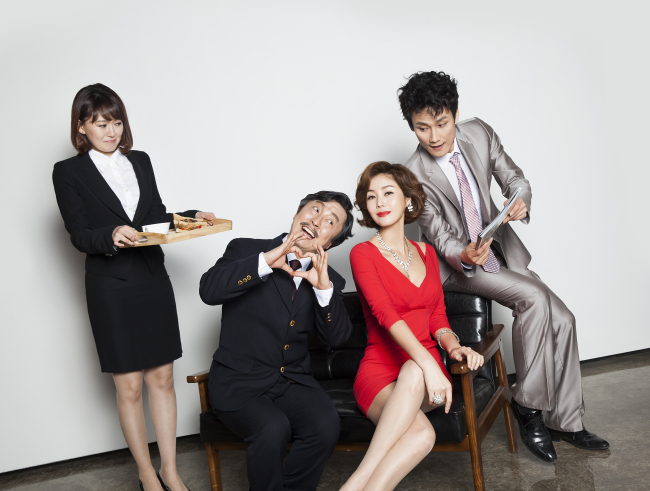 A promotional image of the play “Miss France.” (Soohyunjae)
The two women, in spite of their physical resemblance, are very different from Fleur, who is beautiful but also obnoxious. Samantha is short-tempered, cynical, but honest, and lives with her unemployed husband. Martin, on the other hand, is beautiful and kind, but rather simple-minded and gullible.

Actress Kim, who was in fact crowned Miss Korea in 1988, is to play Martin and Samantha as well as Fleur.

The play enjoyed much popularity in France, where it premiered in Paris in January of last year. That run starred popular jazz and blues singer Liane Foly in the lead.

After winning the beauty contest in 1988, Kim started her career as a TV personality on KBS’ showbiz news program “Entertainment Weekly” in the same year. She made her acting debut in 1991, by starring in the play “A Woman’s Choice.” She’s been particularly active since the late 2000s, appearing in numerous TV drama series and films.

She recently starred as Lady Hyegyeong, the wife of Joseon’s Crown Prince Sado who was killed by his father, King Yeongjo, in period blockbuster “The Fatal Encounter.”