[ The Korea Herald – Send E-mail ]
Students return to tragedy-hit school
By Yoon Min-sik
Published : Apr 24, 2014 - 20:59
Updated : Apr 24, 2014 - 21:00
ANSAN, Gyeonggi Province (Yonhap) ― A high school in this city south of Seoul partly resumed classes on Thursday, eight days after a ferry sank in southern waters, taking the lives of many of its students and teachers on a school trip.

Danwon High School temporarily shut its doors shortly after the disaster took place on April 16, believing that it would be impossible to hold classes normally for the time being with students traumatized by the accident.

Of the 476 people aboard the ferry Sewol, 325 were Danwon students. The official death toll from the ferry sinking rose to 162 on Thursday, but 140 others were still unaccounted for as most of the missing are believed to trapped inside the submerged ship off Jindo island.

A somber atmosphere filled the school campus in Ansan, as classes resumed for third-graders on Thursday. The school authority will reopen classes for the remaining students on Monday.

On Thursday morning, students were spotted going to the school with uniformly solemn faces. 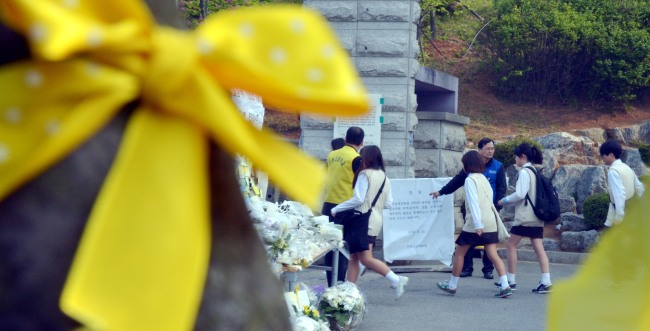 Danwon High School students return to school in Ansan, Gyeonggi Province, Thursday. (Kim Myung-sub/The Korea Herald)
Most of them kept on walking straight toward the school gate, occasionally slowing their steps to look at traces of the disaster.

Colorful Post-it notes were attached to the gate by students and teachers wishing for the safe return of their peers. There were bundles of white chrysanthemums lined up on a table placed just outside the gate.

“I just stayed at home calmly for over a week,” a third-grade student who identified himself just as Kim, told Yonhap News Agency. “I was too gloomy and sad on my way to school,” he said.

The students appeared to be in deep sorrow and shock at the tragedy, even though they are supposed to be busy preparing for college entrance exams, like most third-graders at high schools across the country.

“While the school was closed, I just watched TV because I couldn’t focus on studying,” said another third-grade student, surnamed Lee.

“I killed time emptily all day after the accident,” she added.

Minutes later, a black hearse carrying the corpse of a girl killed in the ferry disaster arrived at the gate and students stepped aside to give way to the car.

The hearse moved around the school playground for about five minutes and then headed for a burial place in another city.

Also on Thursday, funerals for four student victims were held at a funeral hall in Ansan.

Funerals for nine other student victims were to be held in different places during the day.