[ The Korea Herald – Send E-mail ]
Growing elderly population big risk for economy: HSBC
By Korea Herald
Published : Apr 16, 2014 - 20:33
Updated : Apr 16, 2014 - 20:33
The country appears to have already transitioned into an aging society and the rapid growth of the elderly population could be the biggest potential challenge for economic growth in the next few decades, according to a senior economist from HSBC.

“(Currently) the Korean economy is enormously resilient, and I’m not too worried about the rising household debt as well as the (Korean currency) won’s appreciation,” said Frederic Neumann, cohead of Asian Economic Research at HSBC.

“The bigger risk, in the longer term, will be the aging population of the country,” he added during a press meeting in Seoul on Wednesday. 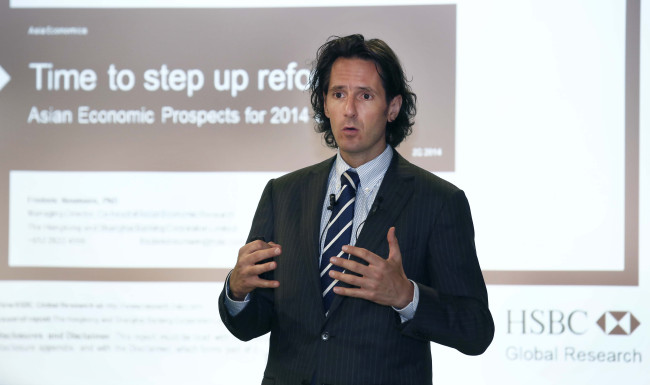 Frederic Neumann, joint chief of Asian Economic Research at HSBC. (HSBC)
Neumann pointed out that economically active people aged between 30 and 59 accounted for the majority of the population in 2012. In 2050, however, the proportion of people aged 60 and older will be the vast majority.

“Don’t think of this as a problem for the year 2050― it is something that will affect the economy over the next 10 years.”

He cited Japan, which is already struggling to finance its aging population, as an example of how much a large elderly population can drain an economy.

Despite challenges including market jitters over the U.S. Federal Reserve’s bond-buying slowdown and signs of a slowdown in China’s economic growth, Neumann said there is a foundation for Korea’s sustained growth.

But that does not mean there is nothing to worry about in the short term. One of the most possible risks for Asia, including Korea, is the U.S. Federal Reserve’s likely interest rate hikes, he said

He noted that Korea is relatively less sensitive to the possible consequences than other emerging economies in Asia, given its solid current account surplus, foreign exchange reserves and relatively low public debt.

“But because Korea is such a big export-dependent economy, if rising interest rates slow down growth in China, India and Southeast Asia, Japan and Europe, that may hurt Korea’s economy growth,” he added.

Meanwhile, he predicted Wednesday that the Bank of Korea’s policy rate, which was left unchanged at 2.5 percent for the 11th consecutive month, would be raised to 2.75 percent in the third of quarter of the year and another 25 basis points in the final quarter.