Malaysia and Vietnam launched searches on Saturday for a Malaysia Airlines flight that lost contact with traffic controllers, as fears mounted over the fate of the 239 people aboard.

Vietnamese state media said citing a Navy official that the Kuala Lumpur-Beijing bound Flight MH370 had crashed into the sea, some 240 kilometers off the coast of Vietnam's Tho Chu Island.

Vietnamese authorities said contact with Flight MH370 was lost near the country's airspace, but its exact location remained a mystery 12 hours after it went missing. 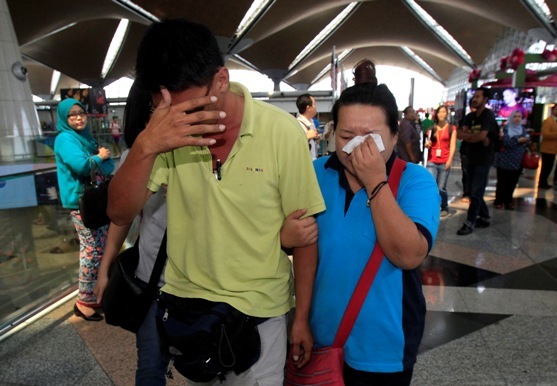 A woman wipes her tears after walking out of the reception center and holding area for family and friend of passengers aboard a missing Malaysia Airlines plane, at Kuala Lumpur International Airport on Saturday. (AP-Yonhap)
"The plane lost contact in Ca Mau province airspace before it had entered contact with Ho Chi Minh City air traffic control," a statement posted on the official Vietnamese government website said.

There were 227 passengers, including two infants, and 12 crew members on board, the airline said. Officials at Malaysia Airlines confirmed Saturday that no South Korean was on board the plane.

The plane, a Boeing 777-200, left Kuala Lumpur 41 minutes after midnight Saturday, and had been due to arrive in Beijing at 6:30 am local time.

"Our focus now is to work with emergency responders and authorities, and mobilize full support," he told a press conference in Malaysia.

By Oh Kyu-wook and from news reports