[ The Korea Herald – Send E-mail ]
[Weekender] Consumers to drive green market
By Korea Herald
Published : Feb 28, 2014 - 20:38
Updated : Feb 28, 2014 - 20:38
Consumer pressure will mean that designers who incorporate green ideas into the way products are conceived, produced and consumed will prevail in future, according to Kim Dae-ho, author of bestsellers “Eco-Design” and “Eco-Creator.”

From active recycling to zero waste disposal, people and businesses will value products that are designed in ways that harm the environment less and deliver more socially responsible messages, he said.

Kim has identified a school of people who are motivated by environmentally friendly lifestyles but are not preoccupied with the idea of reusing old items.

Whether they are designers, marketers, businessmen or something else, they all have one thing in common.

“Eco-designers understand that anything that has the good intention of saving energy or the environment could become eco-design. They take it a step further and turn it into a feasible business plan so that more people can follow suit,” Kim said told The Korea Herald on Monday. 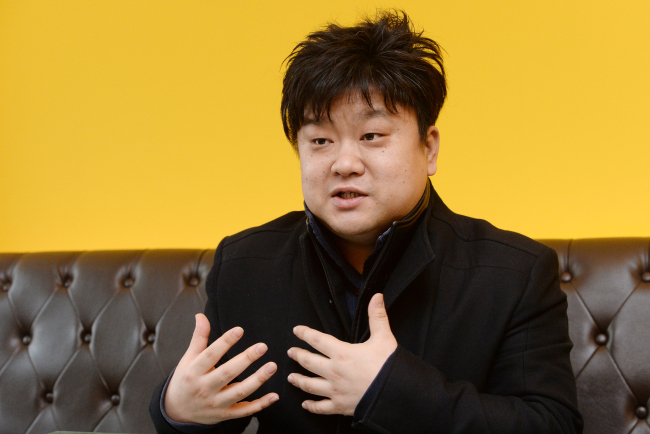 Kim Dae-ho, author of “Eco-Design,” speaks to The Korea Herald in Seoul. (Ahn Hoon/The Korea Herald)
From globally renowned eco-design companies, such as Swiss recycled-bag maker Freitag and Finnish recycler Globe Hope, to smartphone makers, anyone with a passion for the Earth and creative ideas to realize their vision can be an eco-designer, Kim said.

“One can easily be upset (by the idea) that smartphones are eco-design products. But in fact, smartphones have integrated the functions of three or more devices. By buying one smartphone, people do not have to buy several other gadgets with similar functions, which would require a lot more natural resources, energy and other things during production and usage,” he said.

“If people can just change their ideas a little bit, I think they can find business opportunities there,” he added.

Kim, who describes himself as an eco-consultant for businesses trying to incorporate eco-design into their activities, led a successful operation of local social enterprise Beautiful Store’s eco-design unit, “Eco Party Mearry.”

But he admitted that eco-design is never an easy field. The manufacturing cost is much higher than ordinary products because it involves more labor. And in order to minimize carbon emissions, manufacturers stick with domestic production, rather than moving overseas, where labor costs are cheaper.

But consumers in Korea do not seem to appreciate such efforts, let alone acknowledge the “eco-premiums” in the prices of eco-design items.

“Most of all, Koreans’ level of design is far behind that of other leading countries in the field, say Switzerland with Freitag or Finland with Globe Hope. These designers have been brought up in a more design-sensitive atmosphere and they have inherited the DNA,” Kim said. “In Korea, I don’t really think large corporations or the government really understand the concept of eco-design yet,” he added.

But signs of hope have emerged since the late 2000s, when younger people became interested in social enterprises, a business format mixing profit with social messages.

“People thought that eco-design was for activists or those who were very socially conscious. But with the help of designers, eco-design products have become fashionable and approachable. And eco-designers have been mixing the aesthetic aspect of their products with business execution,” he said.

It may take time but eco-design will become a mainstream trend, Kim said. Admitting that eco-design was just the second-best thing humans can do for the Earth ― the first would be not living, he joked ― designing for the environment will be a necessary process rather than a pricey option, he said.

“I think whatever we do, we will never become (completely) eco-friendly. The air that we breathe, the things that we eat, and what we wear … everything consumes nature, and not in a good way,” Kim said.

“But the fortunate thing is that more people are becoming increasingly eager to pose less damage to the environment. As business corporations are chipping in, the government has become aware of the necessity and (other factors are coming into play), it will be time for eco-designers,” Kim said.