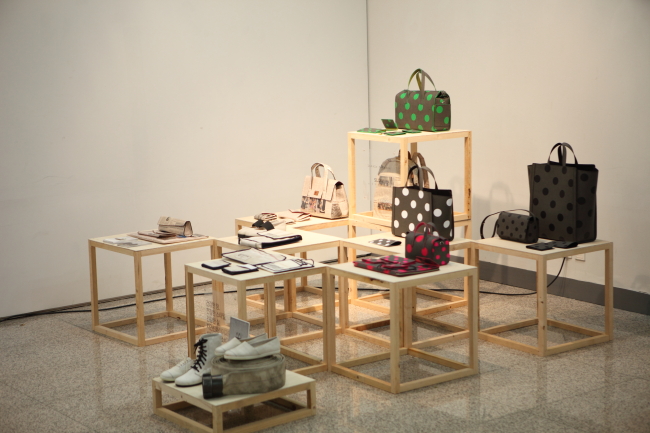 Some toothbrushes naturally break down on their own, while a rocking chair powers a smartphone or lamp. Used coffee grounds, which would otherwise go in the trash, are transformed into mushroom compost, mugs and even lamp shades; old banners and car seat belts become stylish yet strong clothes and purses.

Whatever they are for, the inventions have come together to help carve out a niche in the market and drive a more sustainable economy through innovation.

Founded by John and Heather McDougall, the children of a dentist, Bogobrush makes toothbrushes with bamboo and nylon bristles that they say are completely biodegradable.

Some 450 million toothbrushes are thrown away in the U.S.

The Minnesota-based startup boasts the use of environment-friendly materials in products, powered by their sleek, modern form that entails no “useless grips or gimmicks.”

“Sculpted from bamboo, Bogobrush’s handle has a cylindrical, minimalist form that fits perfectly in every hand,” the firm says on its website. “The brush’s bristles, made from biodegradable nylon, stand up to months of regular use, and when the brush’s use is done, it will return safely to earth.”

The firm added a philanthropic twist to its green crusade: It sends a free toothbrush to people in need for each one purchased by a customer. Its partners range from free or low-cost clinics in Minneapolis-St. Paul, Detroit and Atlanta, to local and national civic groups in Minnesota and elsewhere.

According to the company, 80 million people in the U.S. lack access to adequate dental care.

“We are really excited to give people in need an actual Bogobrush, because we believe everyone deserves to use a toothbrush they actually care about,” says chief executive Heather McDougall in a news release. 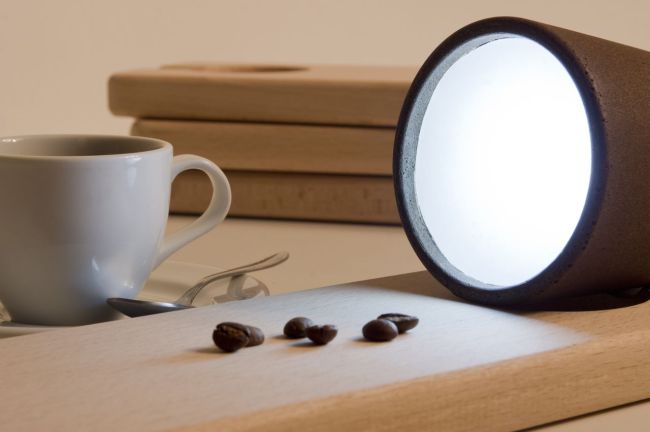 Ecojun Company’s “original green cup” smells like coffee. Made of biodegradable corn starch and used coffee grounds, it is lighter than porcelain mugs or glasses.

In use, it releases no environmental hormones even when filled with hot water, a problem with normal plastic cups, and emits no harmful gases when it is incinerated after use, the firm says.

CEO Lee Jun-seo claims his brainchild marks the first coffee grounds cup in Korea, which imports more than 120,000 tons of coffee beans and uses some 12 billion paper cups every year.

“While all the used coffee grounds just get thrown away, this cup contains 100 percent biodegradable corn plastic and helps lessen waste while smelling so good,” he said in an interview with the Korea Green Foundation.

Every component of the cup appears to reflect its name.

Its “everyday earthday” logo is printed in environmentally certified German ink, while the sleeve is made of recycled coffee bean sacks.

A V-shaped crack on the cup’s rim helps keep tea bags from slipping into the brew. The packaging, made of recycled paper, can also work as a cup holder or saucer, boosting the package’s overall natural image.

The creation has swept various international awards over the last few years, including 2012 Red Dot Design Award, the 2013 IF Award and the 2013 IDEA award.

The Seoul-based social enterprise says it also donates part of its revenues to projects to dig wells in Africa. 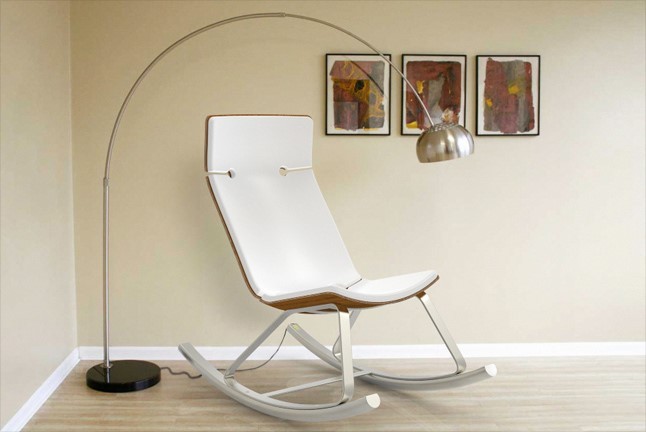 When Igor Gitelstain, an Israeli industrial design college student, introduced a rocking chair as his graduation work in 2012, it captivated many not just for its sleek, futuristic shape but for a secret function: a built-in power generator.

The Ortarky Chair features a linear electricity generator within its base, consisting of ball bearings and magnets in a coil conductor. Its plywood seat is upholstered with a modern white fabric.

As the chair rocks back and forth, the bearings slide alongside a copper coil, generating a current. The energy can be sent to a battery for storage or used to charge an electronic device such as a smartphone or tablet computer.

But all the mechanics of the power production are hidden in the chic metal feet, aside from the inconspicuous power plug outlet at one end of the rack.

“If the chair is produced on an industrial scale, I’d like people to buy it not only because of the electricity, but because of its looks,” Gitelstain was quoted as saying.

His novel idea has since given birth to many copycats and applications, including a wind-powered knitting machine and a chair that powers a light-emitting diode lamp. 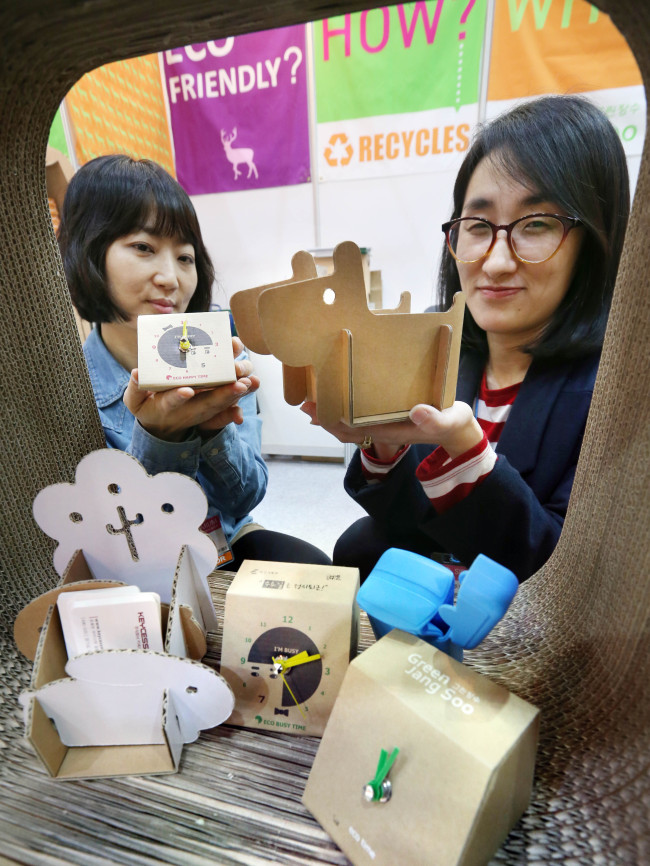 Stationery items made of recycled paper are displayed at an exhibition in Seoul on Wednesday. (Yonhap)
Some up-and-coming fashion houses are turning upcycling into a lucrative business.

Twenty years on, Freitag’s versatile, waterproof and robust messenger bags have a growing throng of fans, with some 350 shops around the globe selling more than 400,000 products each year. No item is the same as another ― whatever you pick, it is one of a kind.

“We recycle everything that the production line requires. For example, we use rainwater to wash the used truck tarps that are delivered to us and then use the final rinse water for the next prewash cycle,” the company says on its website.

Finland’s Globe Hope is another upcycling pioneer. Its unique yet durable clothes, bags and accessories are made from banderols, seat belts, army reserve textiles and hospital garments.

The firm says it lives by its three key values: aesthetics, ecology and ethics.

“While we’re not ready to compromise our ecological values, creating interesting, beautiful and practical products is the most fundamental driver for our design team,” it says.

Other eco-design products similarly boast their beauty and eco-friendliness. They include OAT Shoes’ biodegradable, nontoxic baby shoes that also work as seedbeds for trees; and construction materials produced from seashells and other marine debris by YNG Tech, a Seoul-based heavy equipment parts manufacturer.