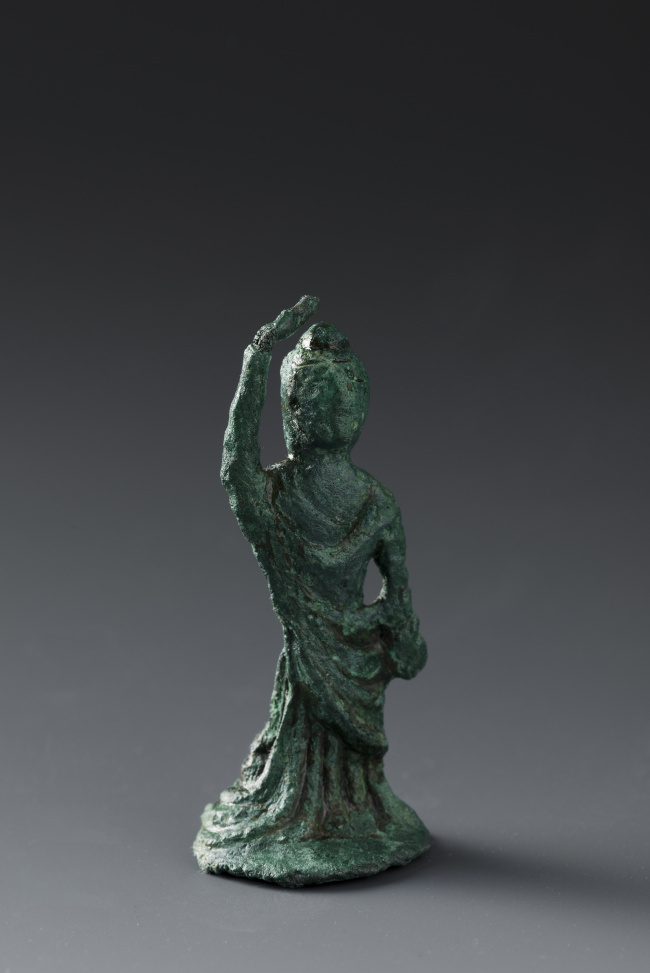 Standing just 6 centimeters tall, this bronze statue is presumed to be of Queen Maya, the mother of Buddha. (Buyeo National Research Institute of Cultural Heritage)
A thumb-size bronze statue of a woman unearthed at an ancient temple site in the southern old city of Buyeo looks like the mother of Buddha, archeologists said Thursday. If they’re right, it would be the first statue of Queen Maya found in Korea and could provide new clues to ancient Korean Buddhism.

The artifact, standing 6 centimeters tall, was discovered by a team of archeologists on site at Wangheung Temple in Buyeo, the capital of the ancient kingdom of Baekje. The temple was built in A.D. 577 under the order of King Wideok to memorialize his late son, according to an inscription on one of the relics found there.

“We know very little about the statue right now. But it does look like Queen Maya,” said Ghang Soon-hyoung, director general of the National Research Institute of Cultural Heritage.

Two things are cited as reasons: First, the figure appears to be wearing a sari, a traditional Indian costume, and secondly, the figure holds the right hand over its head as seen in depictions of Queen Maya giving birth to Gautama Siddhratha in Nepal, China, Japan and other countries.

Legend has it that Siddhartha, a prince in India in the 6th century B.C. who later became Buddha, was born from the right side of Queen Maya, while she held the branch of a tree in Lumbini Park with her right hand.

While most statues of Queen Maya in other countries show infant Buddha coming out of her or at least placed next to her, the statue found in the temple site is without any sign of childbirth.

“The sculpture itself appears to have many artistic characteristics of Baekje and the Three Kingdoms era, but there is nothing in Korea that looks similar to this as far as we know,” Ghang said.

“It is of such a high value akin to national treasures.”

The institute plans to conduct research on when the figure was created and for what purpose, he said.