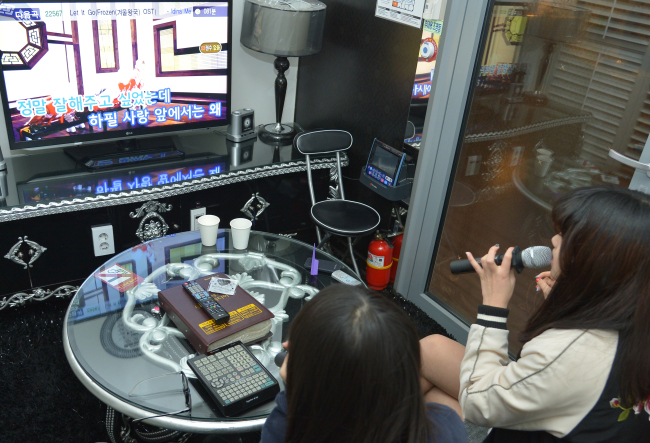 Two women sing forgets it all at a noraebang in Hongdae, Seoul, Wednesday. (Yoon Byung-chan/The Korea Herald)
For less than 20,000 won ($18), Park Min-joo, 25, can relieve her stress in an hour. Visiting a noraebang at least once a week, Park forgets it all in a confined room equipped with a karaoke system.

“It’s just a way for me to release built-up stress,” she said.

“My friends and I sing everything from American oldies to the latest K-pop hits to let go of all the bad things that happened during the week.”

For Koreans, noraebang have served as a common means of dealing with stress.

With comfortable sofas, free snacks, fancy lighting and amplified sounds, noraebang, once consisting only of a small room with a karaoke machine, have become places where people can chill freely.

People can search for and select any song they want with a remote control. A wide range of foreign songs are also available, including Chinese, Japanese and Vietnamese.

Introduced in the early 1990s from Japan, the karaoke machine was an immediate hit, with more than 30,000 noraebangs currently in business in Korea.

According to the Korea Creative Content Agency, about 600,000 machines are installed across the nation ― that’s 1 machine for every 80 Koreans.

Noraebang are not only located in downtowns. They have expanded to military bases. Installed in each company, noraebang play an important role for stressed-out soldiers. Instead of charging by the hour, the military’s noraebang cost 200 won per song, making them affordable for soldiers whose monthly pay is around 100,000 won.

“I regularly visited a noraebang just to shout out. It was the only way to relieve stress in the military,” said Park Yo-jin, 27, who completed his military service in 2011.

“The culture of singing and dancing has flourished in Korea for a long time. Whether they are happy or sad, Koreans tend to share their emotions with each other through singing and dancing,” said Kwak Keum-joo, a psychology professor at Seoul National University. “The Korean culture of collectivism has stimulated the growth of the noraebang. Many Koreans have a tendency to bond as a group by doing activities together, and noraebang are one of the places to do so.”

A new type of noraebang is now popping up to cater to those who seek to sing alone. For about half the normal price, one can sing alone and even record a song in a small booth. Some are even equipped with the latest professional recording and mixing machines.

Su Noraebang in Hongdae, western Seoul, offers such a service. Opened in 2012, it is now seeing its customer base growing. “In the beginning, there weren’t so many customers since it was the first of its kind. But these days we see around 100 customers a day, mostly youngsters, seeking to sing alone,” said 31-year-old manager Kim Geun-min.

Singing at a noraebang, however, is more than just a stress-relieving activity for Koreans. It is part of social life.

Going to a noraebang is almost a compulsory round for most Koreans after drinking. People consider group singing as a way to strengthen their relationships.

“Whether you enjoy singing or not doesn’t matter in Korea. You just have to join in and sing. That’s basic etiquette for socializing here,” said Roh Youn-chan, 35, who works at a state agency.