[ The Korea Herald – Send E-mail ]
Vietnamese Prime Minister Dung chosen to be leadership icon in Asia
By Korea Herald
Published : Feb 2, 2014 - 19:18
Updated : Feb 2, 2014 - 19:20
Vietnamese Prime Minister Nguyen Tan Dung has been widely praised by global institutions and leading news media outlets in Asia and the world for his leadership and “strategic trust” doctrine to cope with regional tensions and economic challenges. Besides, in the contexts where many issues arose within the country relating to implementation of Resolution IV of the Communist Party and Vietnam suffers from impacts from global economic and domestic difficulties, he is still resolutely leading the economy to overcome all challenges and to achieve a 5.4 percent GDP growth, stabilize the economy and control the inflation. 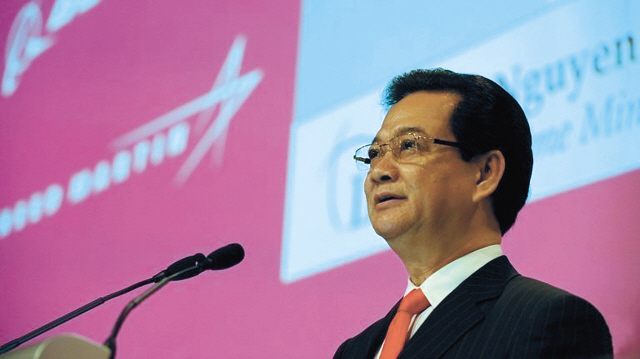 Vietnamese Prime Minister Nguyen Tan Dung speaks at the Shangri-L a Dialogue, a security summit in Singapore, in 2013. (AFP)
Last year saw Asian security tensions and diplomatic feuds spiral. Regional distrust is expected to increase this year, aggravating the contradiction between the need for economic cooperation and the security conflicts between Asian giants.

Vietnam is an interesting phenomenon in Asia today, both in political and economical aspects and the way the country resolves political conflicts and attracts foreign direct investment. Vietnam is very active in supporting global integration and is becoming more confident and assertive in tackling heated international issues, although it encounters substantial difficulties and challenges.

According to the World Bank’s country director for Vietnam, Victoria Kwakwa, Vietnam succeeded in stabilizing its economy in 2013 by maintaining moderate inflation and improving its trade balance. Its economy has suffered no serious blows, despite the bad debt woes that weighed heavily on its financial and banking sector late last year. Increased trust and belief has brought back investors to the Vietnamese market and the prospects of its economy are bright.

The outlook for more than 10,000 domestic enterprises was “revived” with the drastic reform movement, and commitment to promoting the private sector and economic restructuring has made Vietnam the second-most attractive investment destination in Southeast Asia.

After six years of economic uncertainty due to the impact of the economic crisis in 2008, Vietnam has basically seen the crisis “bottom out”: inflation has been brought under control and macroeconomic stability has been maintained.

The reliance on gold and the U.S. dollar for transactions has fallen significantly as belief in the Vietnamese dong has increased. Trade relations and investments have continued to grow in most regions and economic sectors. Government, public and foreign debts have been controlled within safe limits.

While Vietnam has overcome the worst of the crisis with stable institutions and a unified political front supported by a “common voice,” Asia underwent the year of the snake in turmoil, and territorial disputes escalated, peaking in November. After a series of aggressive actions in the South East Sea, China has continued to cause tension by declaring an air defense identification zone over the East China Sea.

The countries in the region engaged in “heated” disputes over the right to move and navigate by air and sea. The Japan-China conflict worsened with Prime Minister Shinzo Abe visiting the Yasukuni Shrine. Security divides would threaten economic integration, despite the progress in regional integration of the previous years.

In 2013 Prime Minister Nguyen Tan Dung has increased his profile across Asia and the international community.

At the Shangri-La Dialogue 2013 the speech by Prime Minister Nguyen Tan Dung, which emphasized “strategic trust,” has given the international community a clear picture of Vietnam. Although it still faces a lot of challenges, the country shows its positive, proactive and accountable approach to common affairs. The speech resonated strongly, and the concept of “strategic trust” is mentioned and used as a new idea, a remedy to geopolitical challenges in current Asia-Pacific region. Prime Minister Nguyen Tan Dung has revealed true nature of the conflict and disagreement in the Asia-Pacific region, that is, a political skepticism causing a stalemate leading to unreconciled conflicts.

In 2013, he was widely praised in many Asian newspapers. The online edition of the Malay Mail newspaper, which has operated since 1896, called him a “true Vietnamese leader.”

The Viet Weekly newspaper commented that the invitation of Prime Minister Nguyen Tan Dung to be a key speaker at the Summit of the Asia security Shangri-La Dialogue showed that Vietnam was respected by regional and global politicians and militaries.

Magazine Eurasia Review said the prime minister was right to convey the message that “It is essential to have peace and cooperation -- this depends on the most important factor being strategic trust.” It agreed with his comment that security in the Asia-Pacific region depends on curbing aggressive actions and that if such competition and intervention bear their own intentions, strategic trust cannot be reinforced -- easily leading to division, suspicion and risk to mutual restraint – damaging peace, cooperation and development.

Even the famous Bloomberg News also praised Vietnam’s prime minister as an influential icon when he committed to opening the state-owned enterprises to market competition and allowing increased foreign ownership of banks as governments are trying to revive growth and participation in trade agreements.

With such special achievements, Prime Minister Nguyen Tan Dung was voted by readers of the Huffington Post as the prime minster who was most praised in Asia in 2013 -- a significantly influential leader in Vietnam and in the region.

Dung is the only prime minister of Vietnam who has been voted by the World Business Magazine as one of the 20 reformists of Asia in his first term. As such, he has brought Vietnam’s economy out of a crisis and made a series of reforms to quickly make Vietnam an Asian dragon.