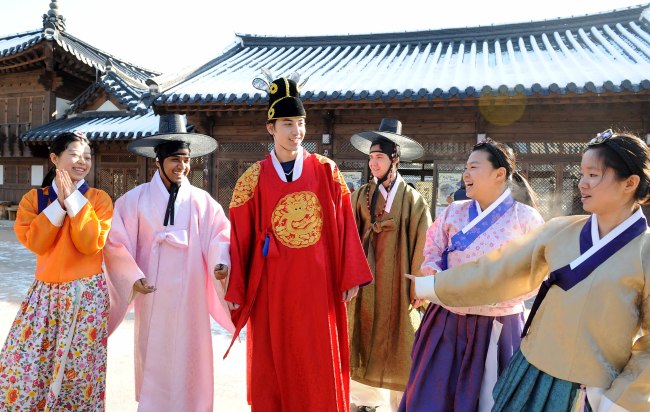 Visitors tie together their talisman fortunes at Namsangol Hanok Village as part of Lunar New Year actitvities.(Korea Herald file photo)
Seollal, the Lunar New Year, is one of the most celebrated holidays in Korea: It is not only a time to pay respects to one’s elders and ancestors, but is also an opportunity to spend time with family and friends to celebrate the New Year immersed in tradition. With the colorful hanbok (traditional Korean costume) and the traditional food and folk games, Seollal gives people the chance to experience some real Korean culture.

Whether it be traveling to the countryside to reunite with extended family or staying in the city to relish the time off work or school, Seollal can be a great opportunity to immerse oneself in traditional Korean culture; and for those looking to get off the couch and usher in the Year of the Horse by doing something different from the usual weekend dinner and a movie, there is an endless number of events in Seoul and surrounding areas that offer visitors opportunities to celebrate the holiday.

Visitors dressed in a hanbok will receive free admission to the five major historical palaces (Gyeongbokgung, Changdeokgung, Changgyeonggung, Deoksugung and Gyeonghuigung), the royal shrine (Jongmyo) and royal tombs, as well as qualify for discounts at a number of museums throughout Korea.

As it does every year, Gyeongbokgung Palace ― Seoul’s largest palace and the main palace of the Joseon Dynasty for more than 500 years ― will organize a number of Seollal events during the holiday weekend for locals and foreigners, ranging from cultural performances to folk games. The most common folk games at the palace grounds include jegichagi (Korean hacky sack), tuho (arrow ring toss) and neoltwiggi (seesaw).

The National Folk Museum of Korea is currently holding an exhibition in tribute to the Year of the Horse. The “Horse, a Vigorous Gallop” exhibition features some 60 works of art including literature and various artifacts that depict horses in Korean culture and history. The exhibition will run until Feb. 17.

Aside from the regular programs of winter kite flying and learning to perform Korean traditional dance and music, the Namsangol Hanok Village located in central Seoul will be celebrating the New Year with fun for friends and family alike. During Seollal, international visitors can enjoy a lesson on the proper procedures of “charye” ― a Korean New Year’s ceremony honoring the past four generations of ancestors of one’s family ― as well as experiencing a presentation of charyesang (table setting for the ancestral worship ceremony). Visitors will also have opportunities to try out fortune writing and rice cake preparation, and to learn to sing Korean folk songs.

The village will also provide traditional Korean kites. Flying a kite on Seollal is symbolic of wishing away bad fortunes and wishing for a prosperous new year. The special Seollal events will run from Jan. 30 to Feb. 2.

For those looking to venture a short distance outside Seoul city limits, the Korean Folk Village in Yongin, Gyeonggi Province, is a perfect place to wander around outdoors: The dirt paths cut through some 300 traditional houses in the large, sprawling village. While walking around, guests can view folk paintings, learn to fly traditional colorful kites and participate in talisman or fortune writing and hang the papers up for good luck.

The events take place every day until Feb. 2 with admission costing 15,000 won for adults and 10,000 won for children. All visitors wearing hanbok will get a 50 percent discount off admission.