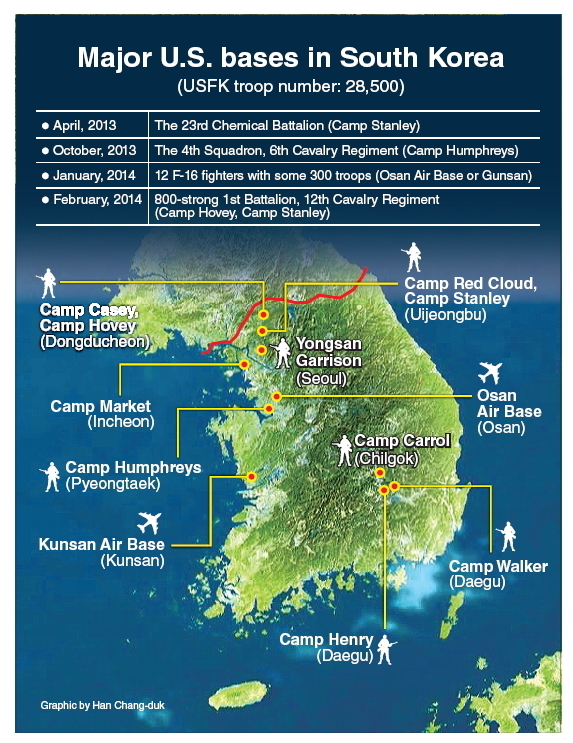 Graphic by Han Chang-duk
The U.S. is reinforcing its military strength on the Korean Peninsula in an apparent move to better cope with potential security threats from an unpredictable North Korea and a more militarily assertive China.

The move comes as Washington is pushing for a strategic shift toward the Asia-Pacific, where an ascendant China is feared to be challenging the regional order through its growing military and economic clout.

The U.S. plans to deploy a dozen F-16 warplanes and some 300 troops to Korea on a rotational basis later this month. Next month, it will rotationally deploy a mechanized infantry battalion to the first brigade of the U.S. 2nd Infantry Division north of Seoul.

The new deployments will be the latest addition to the 28,500-strong U.S. Forces Korea.

The U.S. returned the 23rd Chemical Battalion to Camp Stanley in Uijeongbu last April, some nine years after its withdrawal. The 4th Squadron of the 6th Cavalry Regiment was also brought back to Camp Humphreys in Pyeongtaek last October, five years after their pullout.

The U.S. military says that these deployments are part of its efforts to maintain a “prudent deterrent” against threats to regional security and stability.

The primary purposes of the U.S. military moves are to better deter North Korea and prevent any inter-Korean conflict from escalating into a full-blown war, given that uncertainties have increased in the North due to the unpredictable leadership in Pyongyang, and its adherence to its nuclear programs.

But observers argued that Washington might have taken into account potential threats from China as a crucial factor in its troop realignment in the geostrategically vital region.

“The U.S. is making these moves to primarily prepare for possible cases of instability in North Korea, particularly after the execution of Jang Song-thaek, the once-powerful uncle of North Korean leader Kim Jong-un,” said Park Won-gon, a security expert at Handong Global University.

“But there is also a ‘China factor’ Washington might have taken into consideration to keep an increasingly assertive China in check, as it is pivoting toward the Asia-Pacific.”

After more than a decade of war in Iraq and Afghanistan, the U.S. has begun pursuing a “rebalancing policy” focused on Asia. The policy comes amid growing concerns over China’s assertiveness in the East and South China Seas and over other global issues.

China’s behavior appears to have become more aggressive since 2008, when the West faltered due to a global financial crisis while China continued its economic growth and, in turn, took more pride in its socialist governance mechanism.

After Washington announced its plans to shift its diplomatic, military focus to Asia in 2012, it sent more troops, advanced weapons systems and other military assets to the Asia-Pacific, a move China argues is aimed at countering its “peaceful” rise.

For the U.S., the geopolitical value of South Korea is of great importance as the Sino-U.S. rivalry intensifies, analysts say.

South Korea serves as a bridgehead into the Eurasian continent, a center of global power and wealth, and offers the U.S. military crucial access to the West Sea between Korea and China for the ostensible purpose of joint military exercises. The six-decade-old alliance with Korea, along with the U.S.-Japan alliance, also serves as a vital tool for maintaining the U.S.-led regional order.

Some analysts downplayed the recent U.S. military reinforcements here as a return to normalcy after the protracted wars in Iraq and Afghanistan, or simply as part of the military’s reorganization process following large troops withdrawals from the Middle East.