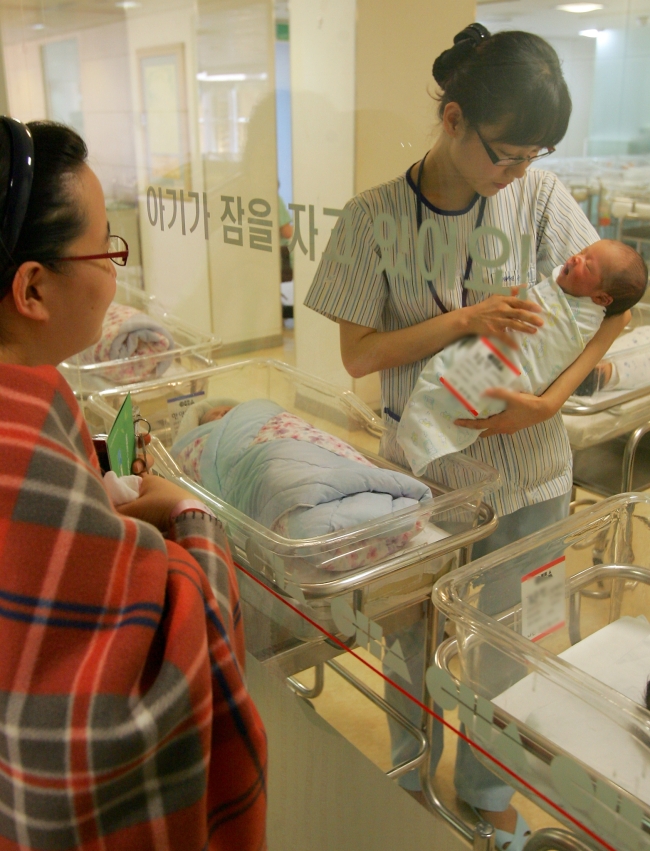 A mother (left) looks at a newborn at a hospital in Seoul. Many young mothers in Korea choose to go to postpartum centers right after they are discharged from hospitals. (The Korea Herald file)
Traditionally for Korean mothers, the three weeks after giving birth have been considered the most critical period for staying healthy for the rest of their lives. They are tasked with keeping their bodies warm by wearing long sleeves even in the scorching heat of summer, not lifting anything heavy and eating miyeokguk, or seaweed soup, three times a day. None of these practices have been scientifically proven to be effective. But the desire of young mothers to follow the traditional rules remains high, along with their expectations of high-quality service as a reward for hours of painful labor.

Postpartum care centers, or sanhujoriwon, are where the wishes of new mothers come true.

At the centers, mothers are provided with hotel-like services 24 hours a day, one-on-one lessons on child care skills and even massages to lose weight and help their bodies return to a prepregnancy state. Meals and snacks are prepared with organic ingredients to promote lactation and help mothers regain strength.

What young mothers love the most about postpartum centers is that they are given time and space to rest without having to stay awake at night to soothe crying babies.

Mothers and babies are separated, except for when they breastfeed. Nurses and assistants are on standby to feed, wash and check the medical condition of the babies. Both mothers and babies get regular medical checkups by visiting doctors.

New mothers’ reasons for choosing postpartum centers vary. But for Oh Soo-hyun, a 33-year-old mother with a 1-year-old toddler, privacy was her main priority.

“I chose to stay at a postpartum center because I wanted to recover without any disturbances. I didn’t want to look exhausted in front of other family members, particularly my parents-in-law,” she said. Some centers do not allow other family members, except for husbands, to visit the centers to meet new mothers and newborns, citing health concerns, she added.

Not every new mother can afford the full-time, luxury services at postpartum centers.

Prices differ depending on where they are located ― whether they are in or outside of Seoul. But in the capital they usually cost between 3 million-5 million won ($2,820-$4,700) for two weeks. The price, however, can be higher than 10 million won for some luxury centers known to have celebrity customers.

Price was a big concern for Cho Young-eun, a 36-year-old expectant mother. But Cho had no choice, she said, as she has to return to work three months after giving birth in January.

“I am worried about failing to recover before I go back to work. It costs a fortune but I believe it will be worth going because this will be a once-in-a-lifetime event for me,” said Cho, who plans to have just one child. Cho paid 5.5 million won for a two-week program at a postpartum clinic located in Dogok-dong, one of the posh residential districts in southern Seoul. It was hard for her to convince her husband, but she was able to have her way since she’s also contributing to the household economy.

“It is a kind of gift to myself. Even if my husband disagreed with my choice, I think I would have paid for the program anyway,” she said.