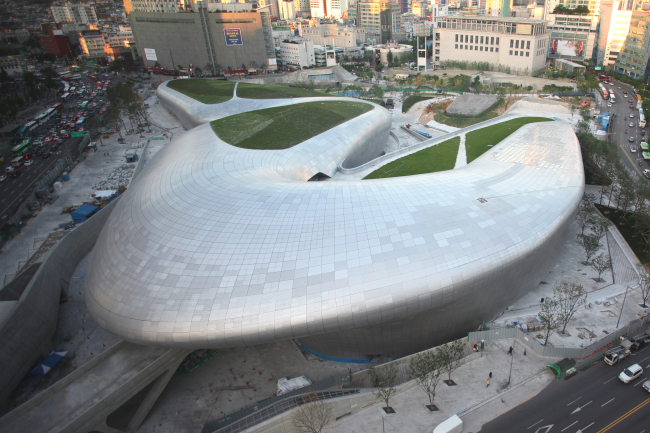 The exterior of the Dongdaemun Design Plaza and Park. (Seoul Design Foundation)
Dongdaemun, one of the largest commercial districts in Korea, will have its new face revealed with the opening of the latest masterpiece by star architect Zaha Hadid, in an ambitious Seoul Metropolitan Government project to establish a design and cultural hub in the capital.

The Dongdaemun Design Plaza and Park will be unveiled in March amid anticipation that the new flashy building and its adjacent public park will attract citizens much like Korea’s first sports stadium originally located on the site did.

The project has not progressed without hitting snags all the way since it kicked off in 2007. Initially planned by former Seoul Mayor Oh Se-hoon, the project faced a possible indefinite delay under the current mayor and has undergone major design changes after historical artifacts were discovered under the construction site.

The grandiose and futuristic design, unfamiliar in the Korean cityscape, has caused much debate in the architecture community. Many architects said the design barely reflected the history and charms of Dongdaemun. 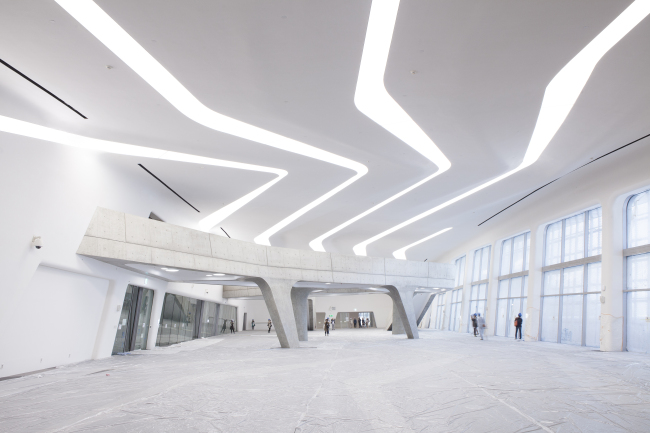 The Biz Center, one of the Dongdaemun Design Plaza facilities. Seoul Design Foundation
Despite criticism, the DDP has set a good example as an innovative modern structure using state-of-the art digital technology.

The free-flowing curves on the exterior are created by 45,133 aluminum cladding panels that don’t divide the structure at any angle. Inside, no pillars obstruct the view from any spot in exhibition halls. Walls and ceilings are curved and tilted, adding dynamism to the white empty space. The building also has rooftop gardens.

A military training site of the Joseon dynasty discovered at the construction site are incorporated as part of the new building without sacrificing the original design plan.

The 85,000-square-meter structure consists of five halls which will host major design events, exhibitions and conventions.

“The DDP is an important civic and cultural building that engages with the city and gives people a place to connect ― creating a public park and plaza that people can use as their own and allows the city to flow. Such public spaces are a vital component of a rich urban life and cityscape; they unite the city and tie the urban fabric together,” said Hadid.

Some of the highlight events include Seoul Fashion Week, scheduled to open in March along with a rare showcase of some of the most prized Korean traditional art works in possession of Gansong Art Museum.

The museum has never before allowed their treasures out for exhibition from its 40-year location in the quiet neighborhood of Seongbuk-dong. Its regular exhibition is so popular that hundreds of visitors wait in long lines to get a glimpse of the precious works of Korean traditional art.

“The exhibition will offer a chance to view and appreciate the essence of the Korean traditional art,” said Jeon Sung-woo, chairman of the Gansong Art and Culture Foundation in an email interview with The Korea Herald. “The exhibition at DDP will be unlike no other as they will reflect our attempt to work with different fields.”

According to exhibition team director Kim Su-jeong, the museum is expected to collaborate with contemporary artists and designers to present unique and fresh exhibitions.

DDP will also open design shops 24 hours a day in line with the working cycle of Dongdaemun, where fashion wholesalers work around the clock.

“I was intrigued by the energy and rhythms of Dongdaemun; the buildings and streets operate around the clock,” Hadid said.

Efforts have been made to include street vendors to be part of a design-propelled commercial boom at the DDP. Six Korean architecture firms are building kiosks for street vendors nearby.

“This is also part of an effort to extend the energy of the DDP to a broader area and help it function as a true landmark of the city,” said Kim Sun-hyun, co-head of DLIM, an architecture group in Seoul, who participated in the kiosk project.

Hadid hoped the DDP would become more than an example of innovative design.

“The design will allow the DDP to be an important link between the city’s contemporary culture, historic artifacts and emerging nature,” she said.