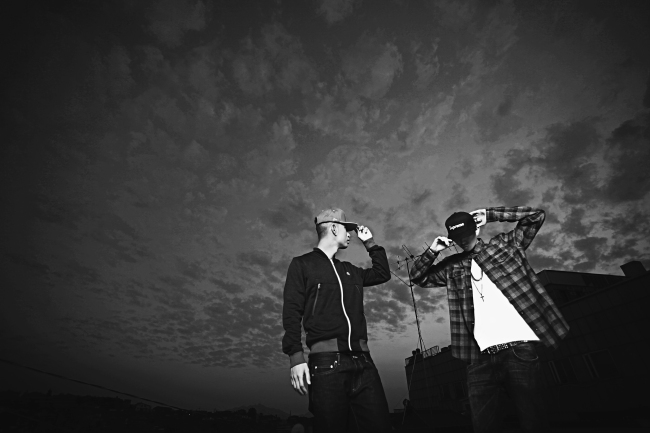 Untouchable. (TS Entertainment)
This is the 21st and last article in a series on producers, MCs, DJs and artists working in the Korean underground hip-hop scene. ― Ed.


Sleepy, 29, and D-Action, 28, of hip-hop duo Untouchable said they feel like they’ve been on a long trip.

Upon completing their mandatory military service in May, they went straight to work on their latest EP, “Trip,” released on Nov. 11.

“After serving in the military, we were back to square one on making new music and continuing with our career. It made us think a lot on how to improve our previous albums’ weaknesses, what must be done to have a better album, and this long thinking felt like a trip. Not like going on a vacation, but more like you go on a trip to refresh your mind and find yourself,” said D-Action.

From that point, they decided to work on becoming better than before their service in order to recapture their fans after two years out of the spotlight.

Both rappers first experienced hip-hop at a young age. D-Action said he was flipping through radio channels and happened to come across hip-hop playing on AFN. He was immediately hooked, listening to artists such as Busta Rhymes and Wu Tang Clan. Sleepy added that he would listen to the program Soul Train and watch hip-hop battles and music videos.

Untouchable is currently signed with mainstream label TS Entertainment ― they were the first artists picked up by the label when it opened in 2008, followed by K-pop groups Secret and B.A.P. But until their big break, they remained in the underground hip-hop scene for five years after debuting in 2003.

The two had met through mutual friends, but had never performed together before one fateful night in Busan at the opening of a club where they were booked to perform.

“It wasn’t like we had planned it, but once we started performing together, our musical interests clicked,” said D-Action. “Once we clicked, we decided to stay together.”

Being underground rappers wasn’t easy. Sleepy said money was always an issue. Once, the two were booked for a show, but were so broke that they couldn’t even afford the subway. So they ended up walking all the way to the venue of the performance.

He added that back in their underground days, they were only really known by hip-hop fans. But since they “hit it big,” regardless of whether it’s hip-hop or K-pop fans, a lot of the general population knows who they are now and their fan base has increased. More so now that the group’s Sleepy is appearing on TV shows such as MBC’s “Radio Star.”

Sleepy said that before joining TS Entertainment, the two had sent out many mixtapes and demos to entertainment agencies, and were often met with rejection. But when former employees from other agencies came together to work at the new label, they made the decision that Untouchable would be their first artist.

The hip-hop duo said that what set them apart from their friends in the underground hip-hop scene was their desire to be musicians rather than celebrities.

“At the same time, my friends were also aiming to be celebrities or musicians, but they were aiming more towards (being) celebrities. Our goal was a little bit different,” said Sleepy.

“We always had the dream of becoming musicians more than regular celebrities. Just musicians.”

They said what pushes and motivates them as artists is the desire to do better. Rather than being motivated by success, they want to make each project better than the last. They said while they may think an album is good or the best they’ve ever done once it’s out, later down the road they find disappointment and wish it could have been better or that they had done things differently. This is what pushes them to do better with each album and song they release.

For now, Sleepy and D-Action said they are working on new songs and a new album. They hope to start releasing songs in January or February, but the schedule is not set in stone.

“If the song doesn’t come out then, it means we’ve partied too much,” D-Action joked. “We haven’t really partied since we got out of military service.”

But for the future, Sleepy said they are working on finding their own unique sound, something that will be instantly recognizable to the listener.

“Right now, we’re not sure if our sound is exactly what we define as Untouchable’s sound,” said Sleepy. “We want to make sure that we find this sound, so that when people hear it on the radio or in the streets, they say, ‘Oh, that’s Untouchable.’”

Adding to that, D-Action said that despite being on a mainstream label, they hate the idea of sounding similar to K-pop and want to keep their hip-hop edge.