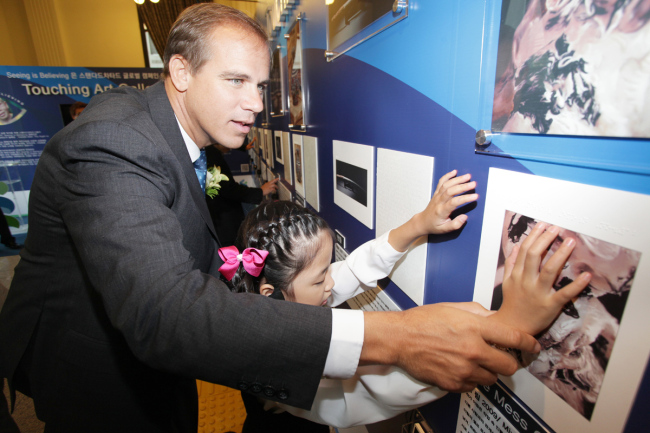 Standard Chartered Bank Korea CEO Richard Hill helps a visually impaired child experience a custom-made rendition of an artwork at the company’s “Touching Art Gallery” in Seoul. (SC Bank Korea)
Foreign companies in Korea remain steadfast on their core values of corporate social responsibility despite occasional criticism over a tendency to shy away from monetary donations.

Of the $179 million of corporate donations in 2012 to the Community Chest of Korea, the nation’s largest fundraising organization, $177.4 million came from domestic companies while only about $1.6 million, or 0.9 percent, was given by foreign multinational corporations, according to a report by the Community Chest.

This is reflected in participation rate. Out of 323 corporate partners of the charity organization, only 5 percent are foreign-funded, the rest being Korean firms.

According to analysts at KPMG, however, a number of global firms believe that corporate social responsibility, as the term suggests, should be focused on “social responsibility.” This means contributing in ways that help solve public issues and ultimately help to improve society.

There is a counterargument, though, that for some companies, what theoretically began as a corporate initiative to take responsibility for a company’s impact on the environment has gradually turned into a custom of making large donations to charity organizations or welfare agencies.

In reality, foreign firms in Korea make regular social contributions through various innovative programs to provide sustainable support to those in need, as opposed to onetime contributions.

For instance, L’Oreal Korea, which was recently awarded a 2013 CSR award by the Korea Trade-Investment Promotion Agency, has several support programs involving women and science.

Since 2009 the company has provided training courses for women wishing to return to the workplace, and reports a 70 percent success rate.

One of its recent CSR activities has been “Science Open Lab,” launched this year with support from the Ministry of Science, ICT and Future Planning. It is a science education program for high school girls that aims to reverse the falling number of female students in science fields. 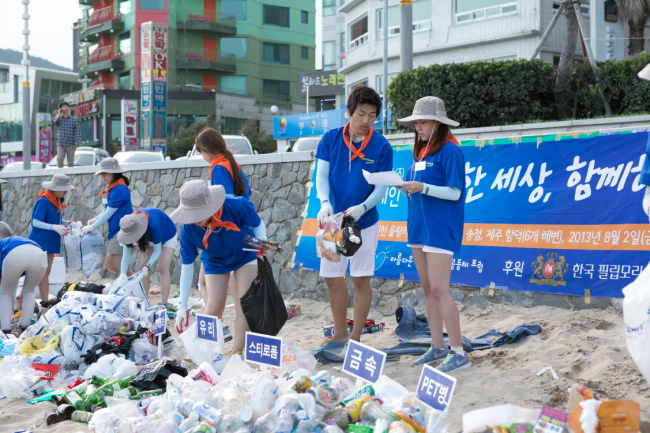 Another major company, Standard Chartered Bank, has held social contribution events this year, all part of “Seeing is Believing,” its global movement to eradicate preventable blindness, in operation since 2003.

Among the company’s events is a walkathon for the visually impaired and a voluntary service group, called “Eye Camp,” that does volunteer work abroad. “Good-hearted Library Project” is the bank’s program to develop audio books, a “touching art gallery,” related smartphone applications and other audio content.

Anyone may apply for the program and help make a “voice donation.”

“Standard Chartered has made multilateral efforts to involve as many people as possible while meaningfully delivering our brand message and promise that we are ‘here for good,’” said Standard Chartered Bank Korea president and CEO Richard Hill.

Another group that makes talent donations is the American Chamber of Commerce in Korea.

“The AMCHAM Innovation Camp is one of the most representative social contributions the chamber has hosted,” it said in a statement.

In the camp, executive members of foreign companies mentor college students on their career plans.

The chamber has recently launched a joint project with Samsung Seoul Hospital and Goldman Sachs to raise awareness about breast cancer and educate employees of member companies in order to help prevent breast cancer and eliminate prejudice and discrimination against colleagues who have suffered from breast cancer.

“This is an expansion of the ‘BRAVO’ program that we, in cooperation with Samsung Seoul Hospital, successfully began last year and is a very special opportunity for the members of AMCHAM as well as for the domestic firms taking part,” said Kim Jong-yun of Goldman Sachs Seoul.

“We not only hope to sponsor the project but also to share our global knowledge and experience in order to help provide sustainable growth and contribute to the local community,” he added.

According to AMCHAM, there are still more foreign firms, such as DHL, FEDEX Korea, Starbucks, AIG Korea, ADT CAPS, Visa Korea and GM Korea, that are known for making distinctive social contributions in a bid to strengthen their presence in Korea and reach out to local consumers.