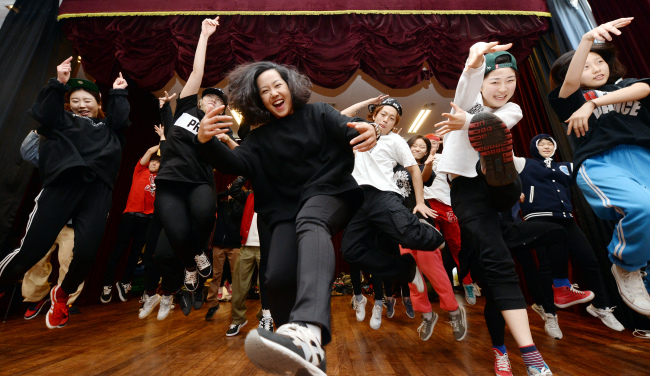 Choreographer Hong Young-joo (center) dances with her students at the Korean International Institute of the Arts on Dec. 6. (Ahn Hoon/The Korea Herald)
Choreographer Hong Young-joo was certainly happy when audition show “Dancing 9” came out. While not involved with the show, she said she was glad to see Korea looking at dance not as something difficult, but as something that people can truly enjoy.

“The reason why I wanted to teach kids is not for the sake of teaching kids, but to show them that it’s fun,” she said in an interview with The Korea Herald on Dec. 6.

“It’s the mindset of Koreans that I think should change,” she said. “I want people to think of dancing like going snowboarding or going swimming, something fun that can be casual.”

In her 20-year dancing career, Hong, 42, has choreographed for many a name in the K-pop industry, from Wax to JYP and even opening numbers for the Style Icon Awards and Melon Music Awards. She said she is closest to singer Baek Ji-young, for whom she has choreographed five albums.

“When some people say, ‘That artist succeeded, not only because of her song, but because of her dance,’ that’s when I feel the proudest. And one of those artists is Baek Ji-young,” she said.

In addition to choreography, she runs her own studio in Apgujeong-dong, as well as teaching in the dance department at the Korean International Institute of the Arts.

Hong never planned to be a dancer. While in school she was in choir and thought she would become a singer. However, her parents had other plans, telling her that “being normal is the best thing you could do.” So instead, Hong entered a company after high school graduation.

Then one night Hong ended up dancing at a club for a company dinner. It was the first time she received compliments for her dancing. Later, when she saw KBS’ “March of the Youth” advertising for entertainers and dancers, she decided to audition. Her dance career officially started shortly thereafter, when they hired her as a backup dancer. During that time she met future JYP Entertainment CEO Park Jin-young and worked her way up to becoming a professional choreographer.

Hong learned hip-hop dance, what she’s best known for, at a club in Itaewon called Moon Night, which was famous for dancers, she recalled. YG Entertainment CEO Yang Hyun-suk learned to dance there as well, she added.

“What I like about hip-hop is that the movements aren’t fixed. You are able to move more freely,” she said. She added she was influenced a lot by artists such as MC Hammer, Bobby Brown and TLC. She infuses a lot of hip-hop elements into her choreography for K-pop.

“When people ask me what genre (dance) K-pop is, I say hip-hop, because there are numerous genres within that genre as well. There is original hip-hop, new style hip-hop, and urban hip-hop,” she said.

And while she someday hopes to own a 10-story building where everything from ballet to modern to b-boying is taught, for now she continues to teach, which she’s done for 10 years now.