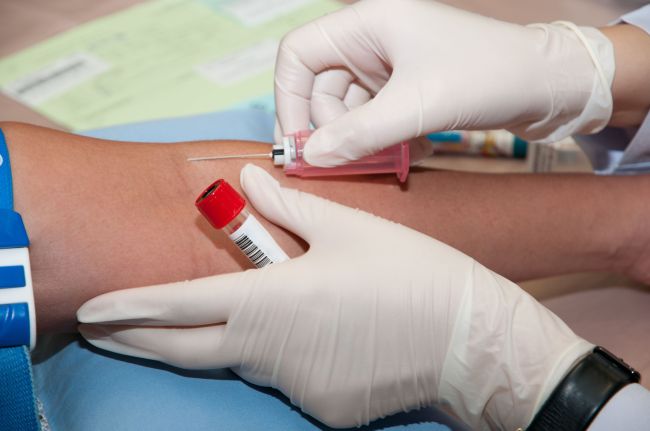 It is an experience familiar to many foreign English teachers: Soon after arrival in Korea, their blood is taken and screened, with the results submitted to the immigration authorities. The reason? A government policy requires that non-ethnic Korean foreigners wishing to teach children must first prove they’re HIV-free.

But, amid a pending U.N. committee ruling on whether the policy constitutes racial discrimination, an unclear picture of the current status and future of testing has emerged across government and educational bodies.

A press officer at the Seoul Metropolitan Office of Education on Thursday told The Korea Herald that all local education offices had scrapped retesting for contract renewal as of this year.

He said, however, that foreign teachers were still required by immigration to submit test results after their initial entry into Korea. The Korea Herald communicated with several native English teachers who said they had been retested recently, in some cases just weeks previously.

The widespread retesting of teachers by local education offices, a stipulation independent of visa requirements that has never been required by the immigration authorities, has made testing potentially ad hoc and seen some teachers tested once or even multiple times a year.

Danielle Choi, recruitment manager for the state-run English Program in Korea, said that local offices made their own policies on tests independently, and made no mention of any policy change.

“It is not something we can drop or not. We are just following the policy. ...We cannot speak on behalf of any provincial office of education.”

One teacher also provided The Korea Herald with a spring 2014 employment contract for EPIK in Gangwon Province, which stipulated that HIV/AIDS testing was still required. The teacher noted, however, that it was possible the contract presented to teachers in January to sign could be revised from the current version.

A Justice Ministry spokesman confirmed on Monday that one-time testing for immigration purposes was still in place, after earlier claiming the ministry had no such requirement.

An official with Korea Immigration Service, a division of the Justice Ministry, however, also said there had been no change in policy.

“We have not changed any of our policies on HIV testing,” Lee You-jin, a member of the residence and visa division of KIS, said via email on Nov. 19.

In follow-up correspondence after publication, however, she claimed that all Korean public servants were required to take the same test, as part of a general health checkup. Accordingly, she said that such a policy could not be regarded as discrimination.

One of several hospitals that list HIV testing for foreigners separately from the general public servant health check on their websites, however, said there was no such requirement for Korean government employees.

The Korea Herald was waiting for clarification from the Ministry of Security and Public Administration as of Thursday evening.

Mandatory testing of E-2 visa-holders has been contentious since its introduction in 2007. Challenges at the Constitutional Court of Korea have been unsuccessful, but the National Human Rights Commission of Korea has argued that the practice constitutes racial discrimination.

Last year, Lisa Griffin, a former English teacher from New Zealand, filed a complaint with the U.N.’s International Committee on the Elimination of Racial Discrimination. That body ― tasked with monitoring adherence to the Convention on the Elimination of All Forms of Racial Discrimination, to which Korea is a signatory ― is expected to announce its decision in March.

The argument being made by Griffin and her attorney is that the policy serves as a “proxy for racial discrimination” rather than having any public health benefit.

“If the goal of the Korean people is to try to prevent the spread of HIV on the peninsula ― whether that means among Korean or non-Korean, or mixes of the two ― if that’s the goal, which it certainly should be, then they will absolutely agree with this decision, because this decision will help the fight,” said Benjamin Wagner, Griffin’s legal representative and a former Kyung Hee University law professor.

“That’s the whole point. It’s not only a discriminatory issue, but it is all about preventing the spread of AIDS and going about it in the most enlightened way.”

A strong association between HIV/AIDS and foreigners in Korea has molded government policy and public opinion almost since the first case of the virus in the country was discovered in 1985.

Unsuccessful proposals to screen tourists in the run-up to the 1988 Seoul Olympics by the then-health minister, noted in a recent Groove Korea magazine article, would eventually result in the compromise of an entry ban for known HIV carriers and testing for select migrant groups.

Strategies to prevent the infiltration of the virus from overseas have inevitably evolved over more than two decades, largely, but not exclusively, in the direction of relaxing restrictions.

In 2010, the government lifted its general entry ban on most HIV-positive foreign nationals, followed later that year by the scrapping of mandatory testing of unskilled laborers and those on so-called “entertainment visas.” The E-6 entertainment visa has long been associated with prostitution.

Mandatory testing for native English teachers, however, was maintained.

The policy was introduced in 2007 after the arrest in Thailand of Christopher Paul Neil, a former English teacher in Gwangju, for multiple counts of child sex abuse, none of which were alleged to have been committed in Korea. It also came in the context of a controversy in the late 2000s when risque photos of Korean women and foreign men socializing at a bar ignited outrage across traditional and online media, resulting in the formation of the Anti-English Spectrum, regarded by many to be a hate group. The AES would later be invited by the Ministry of Justice to submit its views on the tightening of regulations for foreign English teachers.

In the past, the Justice and Education Ministries have taken different positions on the issue, specifically on the need for in-country retesting.

An official at the National Institute for International Education, the division of the Education Ministry that runs the EPIK NET program, told The Korea Herald in 2010 that it supported enshrining retesting as official policy. At the time the organization cited parental concerns and the results of two surveys showing strong public support for testing as rationale for its stance. It is not clear whether those surveys referred to one-time or multiple testing.

But an NIIED official, speaking on condition of anonymity, last week declined to confirm if this was still the organization’s position.

In the meantime, Wagner said he was “very confident” that CERD would rule against Korea and find the policy to be discriminatory.

“The consensus is international; Korean experts say the same thing: We need more voluntary testing,” he said. “Compulsive testing doesn’t prevent the disease because you test one group and then other people don’t want to test because of the stigma involved.”

As someone who does have to undergo this test annually I have no problem with it. However it is my understanding that not every visa group to Korea undergoes the testing.

I understand as someone who works with children that health and safety issues are most important. It would be nice to see, however, that everyone (Korean or foreign) be tested if they work with children.

The testing of anyone for HIV and other invasive procedures is a violation of a person’s human rights. This practice is an evil discriminatory throw-back to the days when Koreans did not want foreigners in the country. Stop this barbaric practice and continue to strive to become a leading country in nondiscriminatory human rights.

I have no problem with taking HIV or drug test if Korean teachers have to take the same tests, otherwise it is discrimination.