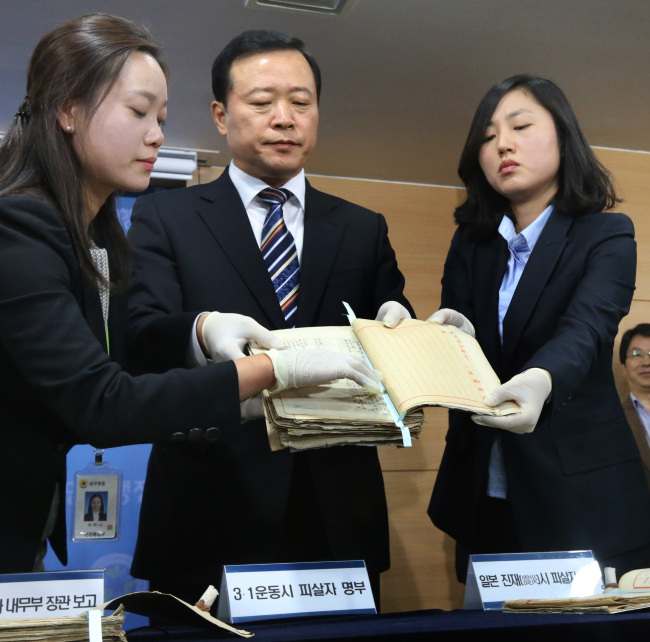 National Archives President Park Kyung-kook (center) holds up the list of Koreans killed after the 1919 independence movement and the 1923 Kanto earthquake at the government complex in Seoul on Tuesday. (Yonhap News)
Korea’s inefficient record keeping system has come under the spotlight again with the discovery of decades-old documents at its embassy in Tokyo, which contain details of nearly 230,000 colonial-era Korean victims.

In June, embassy officials discovered two dust-covered boxes containing lists of those killed after the March 1, 1919 independence movement, and the 1923 earthquake in Kanto, Japan. The lists, compiled in the 1950s, had been sitting in a backroom and only discovered during the process of relocating the embassy.

As for diplomatic documents, the Ministry of Foreign Affairs only began managing records held at the missions in the mid 1990s.

The lack of personnel and professionalism in record keeping is also thought to have added to the problem. None of the nine individuals who headed the National Archives since 2003, when the organization took on its current form, have any clear professional skills concerning record keeping.

In addition, the National Archives’ 17 departments, in which its 334 staff are positioned, are said to include only two or three individuals with professional skills in the field.

Prompted by discovery of the lists in Japan, the developments the Ministry of Security and Public Affairs will launch a government-wide search for historical records, while the Ministry of Foreign Affairs has ordered overseas missions to review all documents.

However, the prolonged absence of a coordinated system has taken its toll with a large number of documents of historical importance already lost.

Documents that are thought to have been lost or destroyed include late President Choi Kyu-ha’s inauguration speech and the minutes of the National Defense Emergency Policy Committee’s meetings. Established in 1980, the National Defense Emergency Policy Committee formed the basis of the political powerbase for former President Chun Doo-hwan after his coup in 1979.