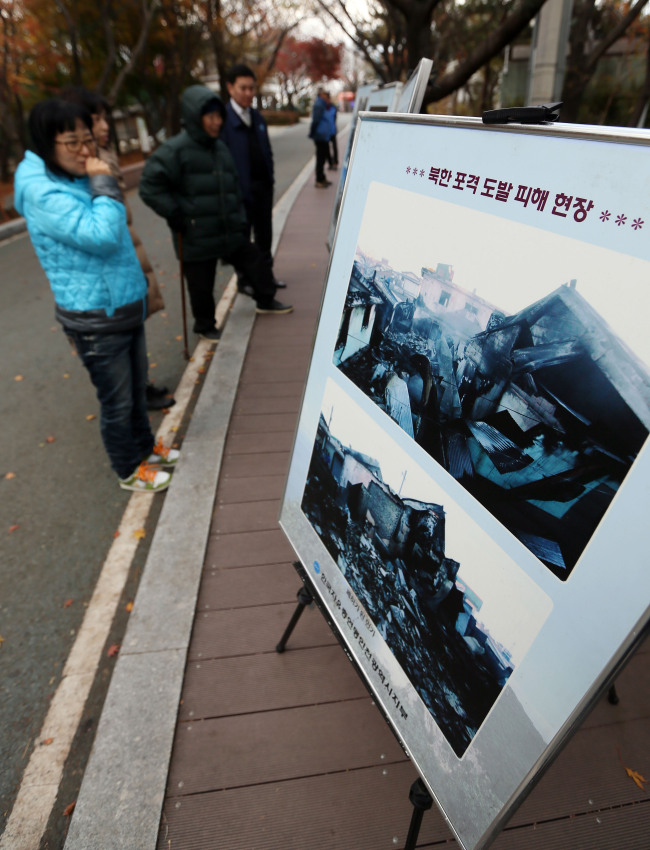 A photo exhibition is held to mark the third anniversary of North Korea’s shelling of Yeonpyeongdo Island at a park in Incheon on Tuesday, four days before the national commemoration of the attack. (Yonhap News.)
Since North Korea’s shelling of Yeonpyeongdo Island three years ago, South Korea has built a tighter defense posture to safeguard its frontline islands with more troops, advanced weapons systems and proactive deterrence strategies.

The Nov. 23 artillery attack that killed four ― two marines and two civilians ― triggered a major shift in Seoul’s passive defense mechanism and added to the push for military reform to better cope with the unpredictable, provocative regime in Pyongyang.

“After our marines experienced the real battle in 2010, we have built a robust readiness posture both mentally and physically,” said Col. Joo Jong-hwa, a senior marine official.

“We all remain on alert with the strong determination that we would not tolerate any unprovoked attack again, which would definitely be met with a strong, merciless retaliation.”

One of the major developments following the attack was the launch in June 2011 of a special command dedicated to defending the vulnerable islands near the tense, western maritime border. An additional 1,200 troops have also been deployed to support the command.

In addition, Seoul has recently deployed Israeli-made Spike missiles with a range of around 20 kilometers. The missile is capable of launching precision strikes on the North’s coastal artillery hidden in mountain caves and tunnels.

The North has deployed some 1,000 artillery pieces along its western coast, posing a continued security threat to the islands and waters near the Northern Limit Line ― a de facto sea border that Pyongyang has long disputed.

The military is also beefing up its surveillance and reconnaissance capabilities around the conflict-laden waters. It plans to complete its introduction of tactical surveillance blimps by early next year.

The blimps are to be used to monitor the northwestern border areas around the clock, officials explained.

Amid South Korea’s increased armament, the North has also stepped up its defense along the border. Pyongyang is said to have deployed more artillery and multiple rocket launchers to its frontline units, which threaten the security of people in the Seoul metropolitan area.