In a recent interview, Angela Kane, the high representative for Disarmament Affairs at the U.N., noted that under a collective security mechanism, military expenditures in Europe have decreased, whereas Asia appears to be moving in the opposite direction.

“If you look at the armament expenditures in the region, they have actually grown over the last couple of years and statistics show some countries have increased over 100 percent,” said Kane. 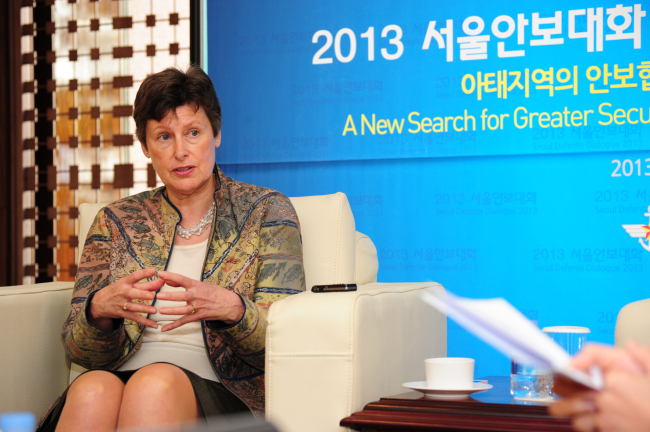 Angela Kane
“Armaments don’t necessarily make you much safer... The nuclear weapons, I don’t believe, really make you more secure and they need a lot of money for maintaining them. Such money could be spent on a lot better purposes.”

Kane has visited Seoul to attend the Seoul Defense Dialogue 2013, an international forum to discuss security cooperation in the region.

Speaking of security cooperation, Kane stressed the need for the region to create a nuclear weapons-free zone, while pointing to difficulties such as the U.S. nuclear umbrella offered to South Korea and Japan.

“One of the important things is the creation of a ‘nuclear weapons free zone.’ Asia is lagging behind,” she said.

“Difficulties are also that you have a lot of states under the nuclear umbrella ― South Korea being one of them and Japan another. You have a lot of other states that don’t have nuclear weapons, but (are) protected in a way by the security alliances.”

As a senior U.N. official of German descent, Kane noted that Korea could take some lessons from Germany’s unification experience, although Korea itself needs to devise a creative way to deal with its future. She depicted her unification-related experience as “emotionally very powerful,” but time-consuming.

“It was a very powerful experience that all of a sudden, you have joint culture and can visit places you have heard and learned about in school. It wasn’t easy to have two societies with totally different systems,” she said.

As the international organization’s disarmament chief, she led its investigation team to look into the alleged chemical attack on the Syrian people in August ― an incident Seoul has carefully watched as the mishandling of the case could send the wrong signal to North Korea, which is presumed to have weapons of mass destruction.

As to the argument that the body was not aggressive enough to bring to justice those responsible for the attack, she said the U.N. secretary-general was supposed to only determine whether or not the chemical weapons were used ― not who used them.

Commenting on Germany’s efforts to compensate its wartime victims, Kane said it is concerned with the “psychology of people.” South Koreans have long argued Japan should learn from Germany’s willingness to apologize and compensate for its wartime atrocities.

“That is something about your psychological make-up. That is not something you can regulate with international norms and diplomatic dialogue,” she said.