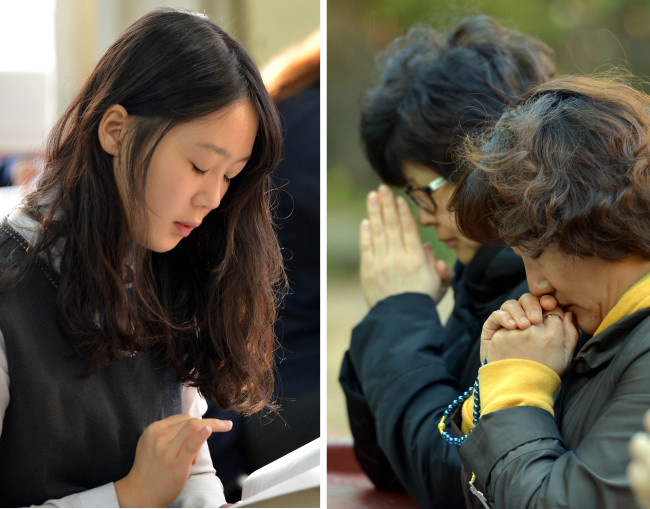 A student sits for the College Scholastic Ability Test at a high school in Seoul while parents of students taking the annual college entrance examination pray at Myeongdong Cathedral on Thursday. (Kim Myung-sub/The Korea Herald)
More than 650,000 students took the annual college entrance exam Thursday. Public offices and the stock market opened an hour later than usual, and airport runways closed temporarily for the nationwide test.

This year, 650,747 high school students and graduates applied for the state-administered College Scholastic Ability Test, better known as the Suneung, according to the Ministry of Education. The number of test takers dropped by 17,775 from last year, due to a decline in the overall number of students, the ministry added.

The test took place at 1,257 centers across the country. To ensure the smooth operation of the nation’s biggest test, the government imposed traffic control and anti-noise measures.

Public and business offices opened at 10 a.m., an hour later than usual, to keep the roads free for students on their way to the test venues, and traffic was restricted within 200 meters of exam sites.

Police operated a call center to provide students with a ride, while subways and buses ran more frequently during the morning rush hour to help students reach the centers in time for the start of the test. The Suneung ran from 08:40 a.m. to 5 p.m.

Military drills were halted and flights were rescheduled to avoid take-off and landing between 1:10 p.m. and 1:40 p.m., to prevent noise interference with the English listening test.

This year was the first time the test takers were able to choose between an easier A version and a more difficult B version for the Korean, English and math sections.

“(As promised) B type questions are about the same difficulty level as those in the previous Suneung, and we set easier questions for the A type,” said Jung Byung-hun, the head of the Suneung exam board.

But due to concerns that those taking the A tests might be at a disadvantage in gaining admission to colleges, the ministry has already decided to abandon the dual-exam scheme and revert to the previous system from next year. Students will be individually notified of their test results on Nov. 27.