The Doosan Bears got past the Samsung Lions 2-1 in Game 4 of the Korean Series on Monday, moving within one win of claiming the South Korean baseball championship.

At their home of Jamsil Stadium in the nation's capital, the Bears scored in the first inning and rode their pitching the rest of the way to take the commanding 3-1 lead in the Korea Baseball Organization (KBO) final series.

The Bears can clinch the championship Tuesday at home, where Game 5 is scheduled to start at 6 p.m. No team has blown a 3-1 Korean Series lead in the KBO's 31-year history. 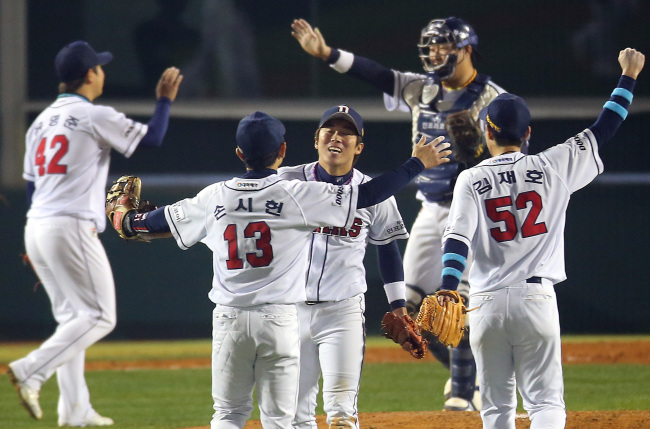 The Doosan Bears players celebrate after winning the Game 5 of the Korea Series at the Jamsil Stadium in Seoul on Monday. (Yonhap News)
They're trying to become the first club to win the Korean Series after finishing the regular season in fourth place. The Lions are chasing their third straight championship.

Doosan's starter Lee Jae-woo was the star of the game, throwing five shutout innings and giving up two hits and three walks for his first career playoff victory. The right-hander punched out the side in the fifth inning as part of his eight-strikeout night.

Reliever Chung Jae-hun gave up a run in the top of the ninth, but with two men on board with two outs, Yun Myung-jun retired Jin Kap-yong on a grounder for the nail-biting save.

The Bears wasted little time getting on board. A bunt single and a walk put two men on, and Choi Jun-seok jumped on a 3-1 fastball from starter Bae Young-soo for an RBI double to left.

Bae's second walk of the inning loaded the bases, and Yang Eui-ji hit a sacrifice fly to center to make it 2-0.

Bae lasted just 1 1/3 innings in taking the loss. Unable to find the strike zone early, Bae allowed two earned runs on two hits and three walks. Only 16 of his 34 pitches were strikes.

In four regular season appearances against the Bears, Bae had a

The Lions managed just three singles through the first eight innings, before Choi Hyung-woo led off the top ninth with a double and started Samsung's final rally. Park Seok-min drew a walk, and Lee Seung-yeop's ensuing grounder moved the runners to second and third.

Park Han-yi was intentionally walked as the Bears brought the double play into the equation. Jeong Hyeon, a 19-year-old rookie shortstop in his first Korean Series, hit a sacrifice fly to right to make it a one-run game.

With men at second and third, however, Jin hit a chopper to shortstop Son Si-heon for the game-ending play.

The Lions also had the bases loaded in the top third. But with two outs, Park Seok-min struck out looking on an inside fastball by Lee Jae-woo.

For Doosan, Derek Hankins pitched 2 2/3 shutout innings and struck out four in relief of Lee. The U.S.-born pitcher extended his postseason scoreless streak to 10 1/3 innings.

The Lions wasted a valiant outing by Cha Woo-chan in relief.

The left-hander held the Bears to three singles and struck out five in 6 1/3 innings and also induced three rally-killing double plays.

The Bears missed a chance to build more cushion in the fourth.

A single and an error by third baseman Park Seok-min put runners on first and third with two outs. Lee Jong-wook hit a hard grounder to third, but this time, Park made a nifty stab to his left and threw out the fast runner at first.

At the plate for the Bears, Heo Kyeong-min, starting at third base in place of the injured Lee Won-seok, went 2-for-3.

Samsung's leadoff man Bae Young-seop went 0-for-4 Monday and is only 1-for-16 in the series. Last year, Bae batted a robust .409 in six Korean Series games, going 9-for-22 with five runs scored.

The Bears said they will start right-hander Noh Kyung-eun in Game 5. The Lions announced that they will task right-hander Yoon Sung-hwan with trying to keep their season alive.

It will be the rematch of Game 1, a 7-2 win for Doosan. Noh was the winning pitcher tossing 6 1/3 innings and giving up one earned run on four hits and striking out seven. It was Noh's first Korean Series win.

Yoon took the loss after giving up six earned runs in 4 1/3 innings in the first game. He also served up a home run to Kim Hyun-soo in the fifth inning.