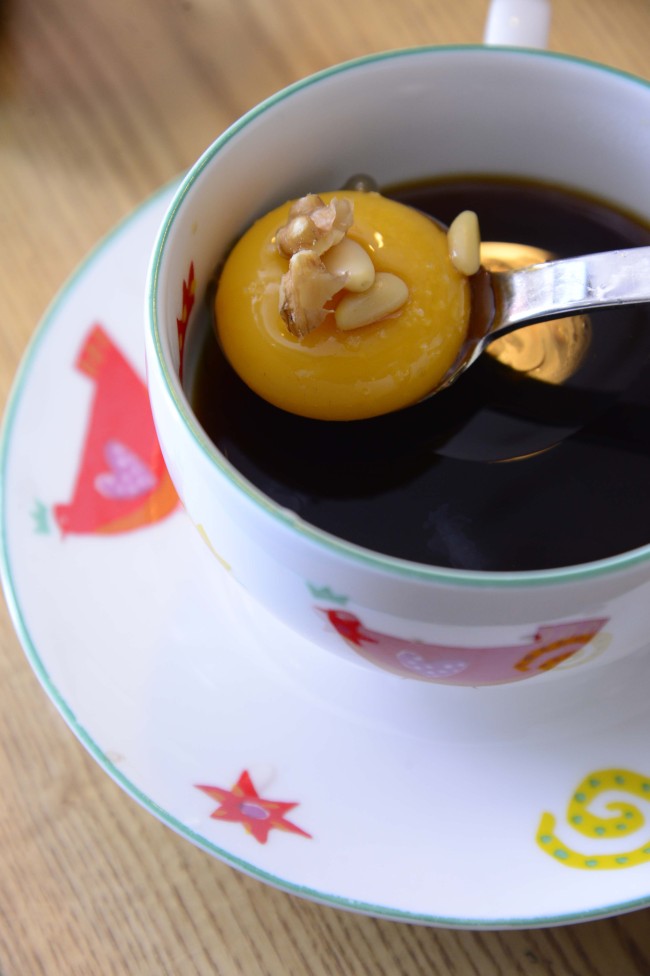 “Morning coffee” is prepared with egg yolk, salt, sesame oil and nuts at Cafe Sanda in Seoul. (Park Hae-mook/The Korea Herald)
An egg yolk, a pinch of salt, some pine nuts, walnuts and a drop of sesame oil: Sounds like some tasty ingredients for a light salad or quick meal, but no, these are the ingredients of Korea’s once-popular coffee concoction “morning coffee.”

In the 1960s and ’70s, morning coffee in Korea had an entirely different meaning than the ritualistic cup of joe so many people grab before heading out to face the world. Morning coffee was the beverage of choice at the local “dabang” ― old-time Korean coffee shops ― where people stopped by in the morning to grab their breakfast-in-one served piping hot in a cup.

The coffee drink is made by taking an egg yolk, sprinkling it with a little salt and adding a drop of sesame oil before gently placing it into a cup of coffee ― instant coffee was the original choice. Some added a couple pine nuts and a walnut for an extra touch.

Kim Chang-won is the owner of Caf Sanda, a quaint venue in the back alleys of Nakseongdae in Seoul with only four small tables to its name. It specializes in coffee bean roasting and hand drip coffee.

Kim is a coffee connoisseur, to say the least. He has taken his love and appreciation of coffee to another level, constantly conjuring up new, and sometimes daunting, creations such as coffee ramen and coffee stew. After reading about morning coffee one day, Kim decided to find out what the all fuss was about.

“This was a really popular drink in Korea decades ago,” said Kim. “It was said that back in the day, reporters used to gather in the dabang and drink morning coffee before going to work.”

One of the main ideas behind morning coffee was certainly not the taste; rather it was intended to make one feel full and more energized with this one drink.

“The salt is used to cut down the richness of the yolk,” he said. “You can drink the entire thing all at once, or sip the coffee and save the yolk for last.”

Although the thought of drinking an oily egg yolk coffee may trigger one’s gag reflexes, the idea of making a meal out of coffee has actually become a trend among some coffee drinkers.

In the 2009 hit KBS drama Iris, starring Lee Byung-hun and Kim Tae-hee, a scene showing one of the characters putting butter in her coffee had some viewers trying it for themselves. This particular butter coffee is often referred to as “Bulletproof Coffee,” the richness of the butter giving one the sense of feeling full.

“Coffee has a close relationship with a country’s culture and people,” said Kim. “I think of coffee as also having a helping hand in communication as well.”

While the streets of Seoul are lined with endless rows upon rows of cafes and coffee drinking establishments, the number of people who drink instant coffee in Korea is still roughly 76 percent, according to estimates from Dongsuh Food, the maker of Maxim coffee. 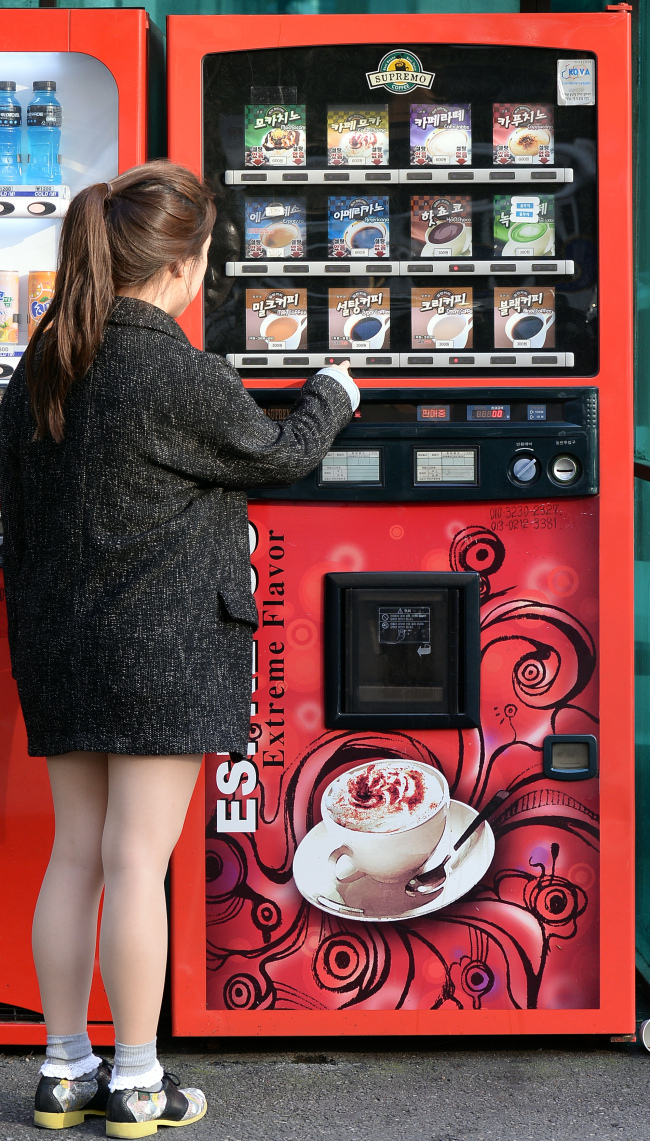 According to the Korean Association of Automatic Machine Operators, instant coffee vending machines were once a thriving business with nearly half a million machines scattered across the country in the 1990s. However, the rise of coffee chain behemoths Starbucks, Coffee Bean and Tea Leaf and other major caf establishments in the country as well as the low cost and ready availability of mix coffee packets have resulted in the number of instant coffee vending machines plummeting, with only 51,782 machines left in the country as of 2011. 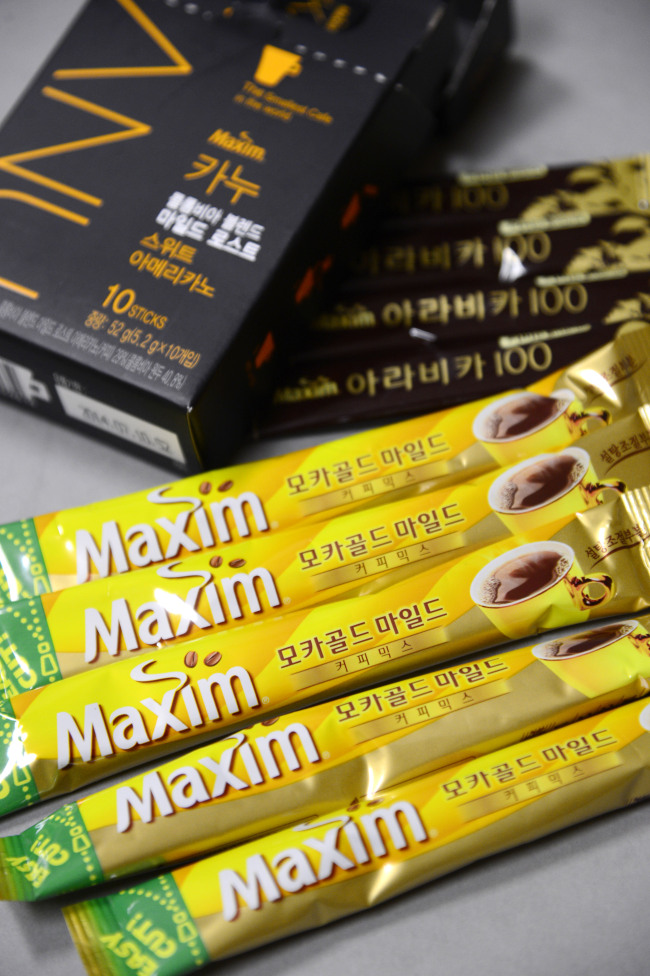 An array of instant coffee mix sachets (Park Hae-mook/The Korea Herald)
Instant coffee mix packets, on the other hand, can be found in almost every Korean household and office building, and can be purchased in any grocery or convenience store.

“Our culture is unique because anywhere you go ― the gas station, work, convenience stores ― there’s always going to be a hot water dispenser and coffee mix,” said an official from Dongsuh Food. “In the U.S., coffee makers are everywhere but in Korea coffee mixes can be found everywhere. This has to do with how easily you can find the mix, and also how easy it is just to make one at work or anywhere.”

The coffee mixes have managed to stay relevant in the competitive market by offering a variety of different flavors. No longer are people limited to the most popular ground coffee, sugar and powdered creamer mix; consumers can now choose among americano, cappuccino, mocha and latte mixes in a wide variety of different flavors. However, one of the biggest reasons it is thought to maintain its popularity is its simplicity and low cost, with an instant coffee packet averaging at only about 130 won per mix.

“Cafes are a cultural space where you can communicate with other people... but a lot of the Korean population usually drinks coffee at work or home,” said the Dongsuh Food official. “A unique aspect about Korean coffee culture is that coffee mix is set up in all workplaces for free, because it’s so cheap.”