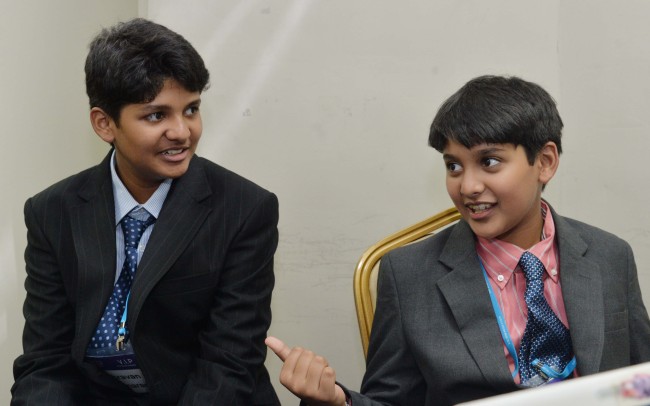 Brothers Shravan (left) and Sanjay Kumaran, co-founders of Go Dimensions, speak during an interview with The Korea Herald. (Lee Sang-sub/The Korea Herald)
The Kumaran brothers, the world’s youngest CEOs of a mobile application company, surprised Korean audiences with their innovative vision for the software industry.

The brothers from Chennai, in southern India, said they were planning big things for the future such as developing more innovative tools to make people’s lives more convenient and healthy. A crowd-based application that shows the pollution or traffic levels of cities around the world is one such invention. The brothers hope to take 50 percent of the app market in India.

“You can see everything from Google maps for now but they don’t (display) graphic details like pollution or traffic levels. So we want to create a map using cloud sourcing,” Sanjay and Shravan Kumaran, co-founders of GoDimensions, said in an interview with The Korea Herald following their presentation at the Herald Design Forum.

Shraven, 13, and his younger brother Sanjay, 12, were invited to the forum as special guests to present their business ideas and future plans.

The boys are the creators of internationally popular apps such as “Catch Me Cop,” “Alphabets Board” and “Prayer Planet.” Including those three, they have seven applications available in Apple’s App Store and Google’s Android Play store.

The applications have been downloaded by more than 35,000 users from nearly 50 countries around the world. The two co-founders of GoDimension donate 15 percent of their profits to a charity group to help underprivileged children around the world.

“We have a vision to give back to the society. We were inspired by our dad who implemented... volunteer work for the poor,” said Sanjay.

Their interest in computers started very early at home when they were tasked with making presentation files at school. Driven by their interest and support from their parents, the two quickly learned how to use programming languages like QBasic and JAVA, as well as animation and app development skills.

Their parents say the youngsters spent most of their time just like other kids, and also had a time limit on the use of computers after school. But they manage their own time to learn more about the business and app development ideas, the parents said.

The brothers said they learnt business skills by reading books written by or about the world’s most successful IT gurus like Steve Jobs and Bill Gates.

The brothers hope to develop not only more examples of innovative software but also hardware in the future after they learn more about the market.