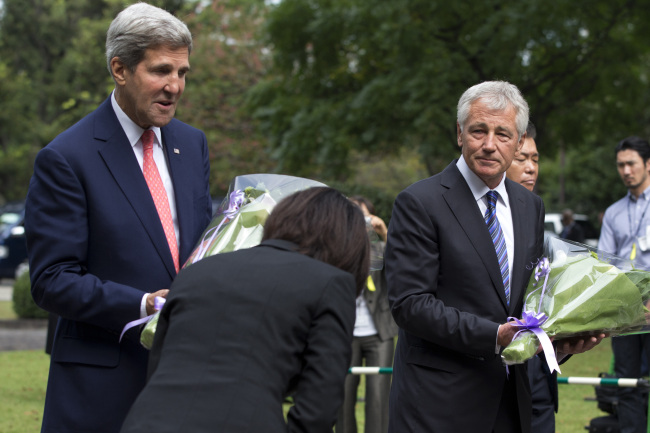 A woman bows to U.S. Secretary of State John Kerry (left) and U.S. Secretary of Defense Chuck Hagel, as they participate in a “wreath laying” ceremony at Chidorigafuchi National Cemetery in Tokyo on Thursday. (AP-Yonhap News)
TOKYO (AFP) ― The U.S. secretary of state laid a wreath at a Tokyo cemetery Thursday, in an apparent American attempt to nudge Japan away from lionizing its controversial Yasukuni Shrine.

John Kerry and Defense Secretary Chuck Hagel became the most senior foreign dignitaries to pay their respects at Chidori ga Fuchi, a cemetery near Tokyo’s Imperial Palace, since the Argentinean president in 1979, a cemetery official said.

Another official said the visit had been instigated by the U.S. and had not come about as a result of a Japanese invitation.

That view contradicts hawkish Prime Minister Shinzo Abe, who has likened Yasukuni, where 14 “Class A” war criminals are among the 2.5 million enshrined, to the U.S. national cemetery in Virginia.

During a visit to the U.S. in May, he told Foreign Affairs magazine that the shrine, seen throughout East Asia as a symbol of Japan’s militarism, was a tribute to those “who lost their lives in the service of their country.”

“I think it’s quite natural for a Japanese leader to offer prayer for those who sacrificed their lives for their country, and I think this is no different from what other world leaders do,” he said.

Abe, who was also prime minister from 2006 to 2007, has stayed away from the shrine after China and South Korea angrily denounced predecessor Junichiro Koizumi’s annual pilgrimage. But a growing number of his ministers have visited it.

Unlike Arlington, Yasukuni’s caretakers promote a view of history that is controversial even at home, with the accompanying Yushukan museum staunchly defending much of Japan’s wartime record.

“This memorial is the closest equivalent. It honors Japanese soldiers, civilians, and support personnel killed on WWII battlefields but whose remains were never recovered by their families. It is a gesture of reconciliation and respect.”

Seki Tomoda, an expert on international politics and diplomacy, said the wreath-laying could be Washington‘s attempt to nudge East Asia over the hump caused by the Yasukuni issue, by conferring legitimacy and respectability on Chideori ga Fuchi.

“What’s worrying America most is the fierce row among Japan, South Korea and China over the Yasukuni issue,” he said.

“Visiting a more neutral place may be a message from Americans... that they want the three countries to ease their confrontation.

“Yasukuni, unlike Arlington, is a religious facility ... I think it’s impossible that Hagel or any other American leader would visit Yasukuni. Chidori ga fuchi was an option (for the U.S.) in order to send a message.”

The Tokyo memorial, maintained by the environment ministry, honors 358,260 dead, mainly soldiers, whose remains have been returned to Japan, but also some civilians who died overseas.

The prime minister customarily lays a wreath at the cemetery ahead of the formal Japanese service of remembrance held at a large hall in Tokyo.