Scaparrotti officially replaced Gen. James Thurman in a change-of-command ceremony held at a U.S. Army base in central Seoul, which was co-hosted by visiting Pentagon chief Chuck Hagel and his Korean counterpart, Kim Kwan-jin, as well as other top commanders of the two nations.

Hagel was traveling with Gen. Martin Dempsey, the chairman of U.S. Joint Chiefs of Staff, for military talks in Seoul as part of his Asia trip that will also take them to Japan. 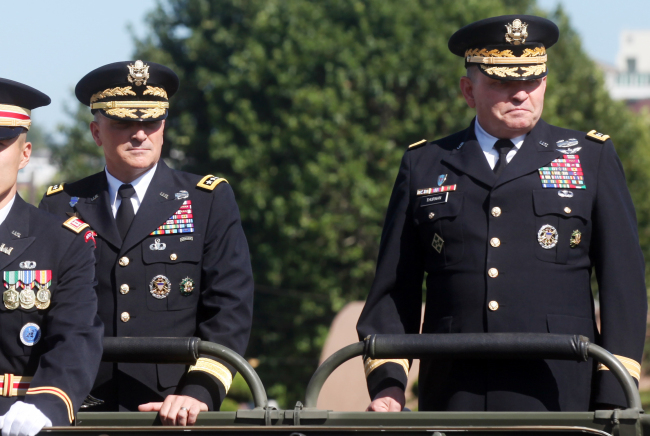 Gen. Curtis Scaparrotti (left), the new commander of the U.S. Forces Korea, and his predecessor Gen. James D. Thurman inspect the honor guards during a change-of-command ceremony at the USFK headquarters in central Seoul on Wednesday. (Yonhap News)
Scaparrotti has been serving as director of the Joint Chiefs of Staff at the Pentagon and previously was the No. 2 U.S. commander in Afghanistan.

“We will remain vigilant and ready. We will secure a stable future for Korea,” Scaparrotti said in an inauguration address. “I am confident in our warfighting abilities and our ability to deter North Korean aggression and, if necessary, to decisively fight and win.”

As the head of USFK, he will concurrently lead the South Korea-U.S. Combined Forces Command and the United Nations Command, which monitors the truce on the peninsula.

“The Republic of Korea, the United States and the United Nations Command sending states have stood together for more than 60 years maintaining the armistice and setting the conditions for stability in Northeast Asia,” he said. “We will be ready to fight tonight.”

The new commander comes at a critical time for the alliance between Washington and Seoul, with major changes looming over the location of the American base and the transfer of wartime operational control.

During a bilateral defense summit earlier in the day, Kim and Hagel signed a tailored deterrence strategy against North Korea nuclear and other weapons of mass destruction threats, which underscore the U.S. commitment to extend its nuclear umbrella on the peninsula. (Yonhap News)