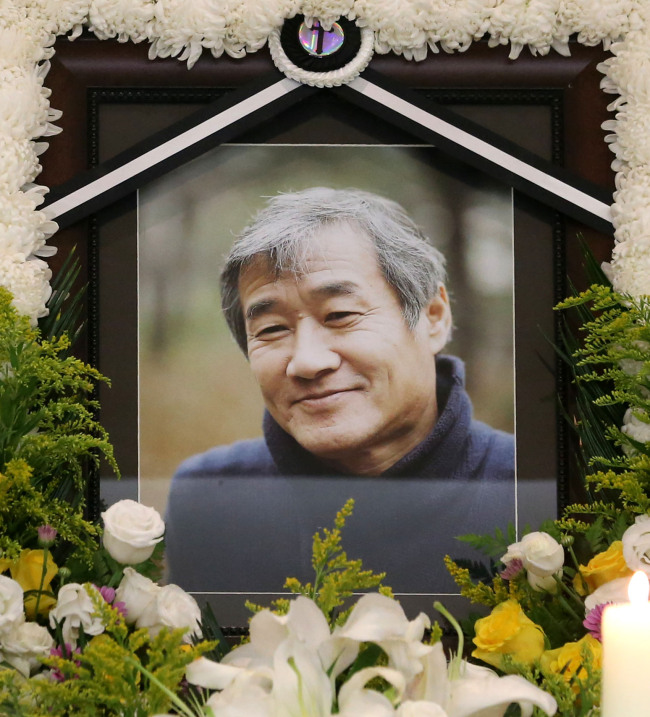 Late author Choe In-ho’s photograph is displayed in his wake being held at the Catholic University of Korea Seoul St. Mary’s Hospital in Seoul. (Yonhap News)
Author Choe In-ho, a literary legend whose works have been made into numerous movies and TV drama series, died of cancer on Wednesday, about seven months after the publication of his latest collection of essays, “Choe In-ho’s Life.” He was 68.

Born in 1945 in Seoul, Choe is one of the very few Korean authors who started their writing careers as a teenager, along with Hwang Sok-yong. He made his literary debut at age 18, while attending Seoul High School, by winning a writing competition hosted by the Hankook Ilbo, a local daily, in 1963.

Choe was often dubbed the “eternally youthful author”: Many of his best-known works, including “Winter Wanderer” and “Whale Hunting,” dealt with Korea’s youth culture in the ’70s and ’80s, often featuring struggling university students in and out of love as protagonists.

He won the prestigious Yi Sang Literary Award in 1982 for his short story “Deep Blue Night.” The story, featuring alienated Korean escapists living in San Francisco, offers a rare glimpse into Korean-American life in the 1970s. The story was made into a film of the same title in 1984 starring Chang Mi-hee and Ahn Sung-ki and enjoyed much box-office success.

His 2000 period novel “Sangdo” sold some 3 million copies. The novel, which is a fictionalized biography of the legendary Joseon period merchant Im Sang-ok (1779-1855), was later adapted as a TV drama series of the same title in 2001.

Many of his other works, such as “Winter Wanderer,” “The Hometown of Stars” and “Haeshin,” were made into films and TV drama series and also enjoyed success.

He also wrote a number of screenplays based on his original novels, including “Whale Hunting,” “The March of Fools” and “Deep Blue Night.” He swept three best screenplay awards for his script for “Deep Blue Night” in 1985 ― from the Grand Bell Awards, the Paeksang Arts Awards and the Asia-Pacific Film Festival.

Choe was diagnosed with salivary gland cancer in 2008. He published a number of collections of essays since the diagnosis, including “Letters from the Heaven” and “Bread from the Heaven.” He converted to Catholicism in 1987.