Of her upcoming role as a quirky and seemingly cold housekeeper, the 38-year-old actress said, “I really wanted this role because it was completely different from previous heroines that I have played.”

Slated to air this Monday, SBS’ “Suspicious Housekeeper” (working title) not only has high profile “Winter Sonata” star Choi on board, “Sign” and “Phantom” co-director Kim Hyung-sik will be taking the reins of the upcoming black comedy, bringing his knack for suspenseful thrillers with unexpected twists to the table. 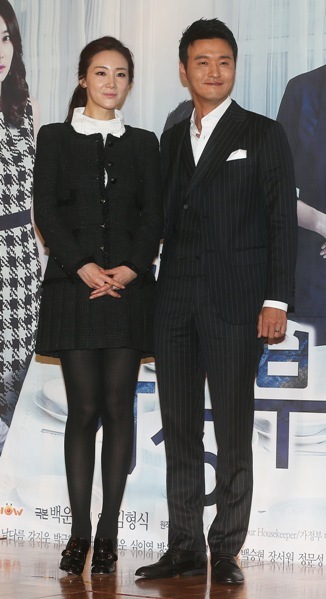 SBS’ “Suspicious Housekeeper” (working title) stars Choi Ji-woo (left) and Lee Sung-jae attend the drama’s press conference in Seoul on Monday. (Yonhap News)
With “Sign” and “Phantom,” Kim and crew deviated from the standard drama formula, offing their heroes, first at the end of “Sign” and then throwing audiences off yet again by the untimely and early demise of the male lead at the beginning of the following series, “Phantom.”

Audiences are likely wondering what to expect from Kim’s latest project, especially with Hallyu diva Choi as the headline act.

In the new SBS drama, Choi plays Park Bok-nyeo, a stoic housekeeper who will do whatever is asked of her, even, so the rumor goes, if that means murder.

Park’s latest stint involves caring for a recently widowed father, played by actor Lee Sung-jae, and his four troubled children, all of whom are grappling with the aftermath of their mother’s mysterious and sudden death.

“I was really charmed by the way the heroine refrains from letting her emotions show,” Choi said, explaining how she was drawn to the inexpressive qualities of her character at the drama’s press conference in Seoul on Monday.

“It is incredibly difficult to not be able to react to a co-star,” said Choi. It was a bit lonely to play her icy heroine, she added.

“I was very excited to work with Choi Ji-woo,” co-star Lee Sung-jae said before hinting that, “while Choi Ji-woo holds the key to this drama, children also play a huge part in this series.”

Of working with four children, the veteran actress said, “I think this is the first time I have really worked with children since I debuted.”

Though the plot reads like a dark, angst-driven thriller, director Kim promises a “bright and healthy drama.”

Furthermore, it remains to be seen whether or not recent controversy over the Korean title of the drama will have any negative effect on how audiences respond to the series and if having a star director and actress duo on board will translate to a viewer ratings success.