[ The Korea Herald – Send E-mail ]
‘Uniformed diplomats’ for Korea
ROK Support Group commander emphasizes discipline, integrity and camaraderie
By Korea Herald
Published : Sep 11, 2013 - 21:15
Updated : Sep 11, 2013 - 21:15
KATUSAs are “uniformed diplomats” that promote the image of the Korean Army while working side by side with American troops, the commander of the U.S. 8th Army ROK (Republic of Korea) Support Group said.

Paying particular attention to such a role, Col. Lee Seok-jae has focused on their discipline, integrity and camaraderie since his inauguration last July.

“For new U.S. staff coming to Korea, KATUSAs are the first Korean soldiers they come across. As such, KATUSAs are a window through which they experience and evaluate the Korean Army,” Lee told The Korea Herald.

“I have encouraged KATUSAs to take pride in working as representatives of the Korean Army. Their missions, thus, require more self-restraint and sacrifice given their behavior can affect the image of the entire Korean military.” 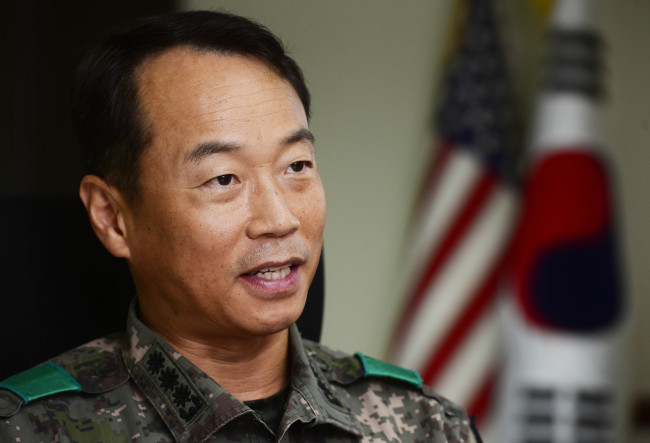 “Along with the South Korea-U.S. Combined Forces Command, the KATUSA program is a symbol of the military alliance. Assigned to the U.S. military, it has truly become an integral part of the 60-year-old relationship,” he said.

Lee listed a number of requirements for a KATUSA including English proficiency and mental and physical strength to work alongside the more experienced American troops.

“Although most recruits join the KATUSA program after passing an English proficiency test, many of them face language difficulties. Military jargon, in particular, is more difficult than thought, and getting used to it takes time and effort,” he said.

“But their learning skills, motivation and concentration are remarkable, and overall, most of them overcome them without serious trouble.”

Apart from discipline and work ethics, the ROK Support Group has paid as much attention to their equal treatment and welfare.

“We view equal opportunities as one of the crucial areas and file complaints with the U.S. authorities when there is any problem with regard to that,” he said.

“I heard there used to be some discrimination in the past, but now, KATUSAs are all on an equal footing due primarily to their excellent job performances. The only thing they can’t do is use the U.S. post exchange.”

Lee also expressed his hopes that the KATUSA program would continue to help cement the alliance for another six decades and more.

“After the handover of wartime operational control currently slated for 2015, the KATUSAs would be the only ones integrated into the U.S. military. The system would surely remain as a vital contributor to the alliance,” he said.